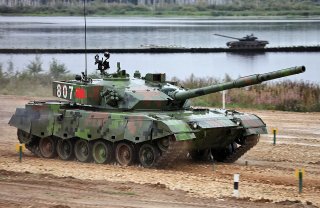 Here's What You Need to Know: The baseline Type 96 MBT weighed forty-one tons and boasted a maximum speed of around sixty-five kilometers per hour. Where the Type 96 markedly lagged behind its Soviet and U.S. contemporaries was in its survivability.

China’s tank industry is relatively young compared to its U.S. and Soviet-Russian counterparts. Yet the People’s Liberation Army (PLA) has launched major efforts in prior decades to not only keep pace with but potentially surpass the main battle tanks (MBTs) of its Russian and American counterparts.

Widely considered as China’s first modern MBT, the ZTZ-96–also known as the Type 96–is among the PLA’s most ambitious 1990s projects. Here is how the ZTZ-96 stacks up against its competition, and what China is doing to keep it viable for years to come.

The Type 96 grew out of earlier Chinese plans to modernize the second-generation Type 88 tank, which itself was a part of the PLA’s ongoing efforts to replace the Type 59–a license-copied Soviet T-54A tank.

The ZTZ-96 was introduced into service in 1999. The tank boasted a more powerful 730-horsepower engine as compared to its predecessors in the Type 80 series. It likewise featured a redesigned turret, headlined by a more potent 125mm ZPT98 smoothbore gun than the 105mm main armament featured on some prior Chinese tanks. As with other Chinese tanks of its time, the Type 96 featured a 7.62 mm coaxial machine gun and roof-mounted 12.7mm heavy machine gun.

The baseline Type 96 MBT weighed forty-one tons and boasted a maximum speed of around sixty-five kilometers per hour, which likewise posed a marked improvement over earlier 80-series tanks. The baseline model offered a serviceable, if not exactly remarkable, operational range of roughly 400 kilometers. The tank also featured a new fire control system, incorporating a laser rangefinder and basic automatic targeting features. Where the Type 96 markedly lagged behind its Soviet and U.S. contemporaries was in its survivability. The tank’s composite armor was quite clearly insufficient at a time when explosive-reactive armor (ERA) like the Soviet-developed Kontakt-5 system was becoming more widespread. This problem would be somewhat redressed with the tank’s Type 96A revision, a third-generation upgrade package that brought a new armor solution that included an ERA system. The revision likewise introduced a new round of onboard electronics and targeting systems upgrades.

Reports first emerged in the mid-2010s of a new “Type 96B” variant. This latest version of the tank was prominently featured at this year’s edition of the International Army Games in Moscow, Russia. Chinese state news outlet Global Times observed that the Type 96B shown at the event seemed to differ from the new variant’s previous iterations, boasting slightly thinner proportions and a “fume extraction device” to better protect the crew from gas intoxication. Citing Chinese military publication Tank & Armoured Vehicle, Global Times noted that the Type 96B features over 100 new modifications. The 96B is expected to introduce a stronger engine and better main gun, though the full extent of the upgrade package remains unclear. Despite these incremental improvements, the Type 96B can hardly be considered as China’s answer to mature, well-rounded Russian and U.S. third-generation MBT platforms like the T-90A and M1A2 Abrams. That task falls instead to the Type 99, China’s first and only mass-produced third-generation MBT platform.

According to the latest publicly available estimates, around 2,500 Type 96 and 96A tanks continue to serve in the PLA.