Chinese Special Forces Have Been Winning Battles Totally Under the Radar 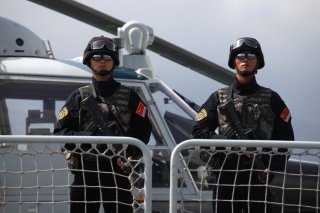 Here's What You Need To Remember: Special forces are only as good as their transportation, and China is developing the capability to convey special forces to where they are needed.

Some special force units get all the attention. America’s Delta Force, Russia's Spetnatz, and Britain's SAS have glamorous reputations.

But Chinese special forces exist, and they have been growing in size, sophistication, and global reach, according to the U.S. Army's Foreign Military Studies Office (FMSO). Their command structure has been streamlined and training has become more realistic.

China put these changes to this summer during the first comprehensive assessment of its special forces. The exercise, Ingenious Special Operations Soldier-2018, "tested all levels of command, including brigade, battalion, company, element and squad levels," FMSO said. "While media coverage of the exercise emphasized tests of special forces skills, such as fast-roping from helicopters, night operations, and sniper attacks, the underlying point of the exercise is likely to be the test of command capabilities."

As for naval commandos, in 2002 the People's Liberation Army Navy created the Jiaolong (“Water Dragon”). In 2015, it evacuated foreign nationals from the Yemen conflict, and in 2017 it recaptured a hijacked freighter from Somali pirates in the Gulf of Aden as part of China's anti-piracy patrols in the region. "Although the unit has provided ample fodder for Chinese Navy recruitment videos and propaganda, it should not detract from the fact that naval special forces have important roles to play in how China could conduct wars across a range of theaters," said FMSO. "Video of Jiaolong unit training shows them operating in a wide range of environments, from desert to frozen mountains and conducting airborne, surface, and underwater infiltration missions."

"The Leishen unit, as elite parachutists, has acted as a testbed for innovations in the airborne corps," FMSO said. "They train jumping from different aircraft and using various parachute configurations and maneuvers. Members of Leishen have attended Venezuela’s Hunter School to learn jungle warfare and participated in several international special forces competitions."

Special forces are only as good as their transportation, and China is developing the capability to convey special forces to where they are needed. "China has traditionally lacked the transport aircraft needed to perform a major airborne operation," FMSO notes. "With the Y-20 heavy-lift transport entering mass production and upgrades to smaller aircraft being rolled out, that situation is changing. Although still in its early stages, PLAAF special forces units like the Leishen commandos have laid an important foundation for building a strong strategic deterrent and power projection capability."

Michael Peck is a contributing writer for the National Interest. He can be found on Twitter and Facebook. This article first appeared in September 2018.