Civil War Secrets: This Woman Posed as a Man to Spy for the Union Army 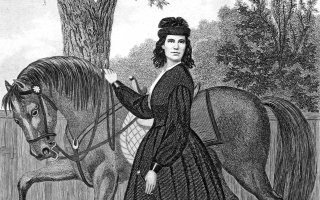 Here's What You Need to Know: Edmonds wanted revenge on the Confederacy.

In 1862, Confederate authorities captured a Union spy in Richmond, Virginia and executed him. The agent’s death created a job opening in the secret service of the United States—one that the unlikeliest candidate ultimately filled.

The Union’s new spy was a woman and an expert of disguise named Emma Edmonds. In the spring of 1862 she infiltrated Confederate lines by dyeing her skin black with silver nitrate, donning a wig and posing as a male slave.

Edmonds was Canadian. Born in 1841, in 1861 she enlisted in a Michigan infantry unit while disguised as a man. The secret woman soldier was on the front lines around Fortress Monroe, on the Virginia coast, when she learned of the spy’s execution in Richmond.

She applied to fill the agent’s position—a gambit she recounted in her bestselling 1864 memoir Unsexed, or the Female Soldier. Historian Philip Van Doren Stern included a chapter from Unsexed in his 1959 book Secret Missions of the Civil War.

Edmonds had an ulterior motive in wanting to be a spy. During the fighting around Fort Monroe, Confederate sharpshooters had killed a Union lieutenant named James Vesey. Edmonds was “obviously in love” with Vesey, Stern wrote.

She wanted revenge. And to get it, she would pretend to be a male slave and enter Confederate territory.

First, she had to prove to Union spymasters that she was loyal … and could use a firearm. She attended her interview in her “normal” disguise as a man. “My views were freely given, my object briefly stated, and I had passed trial one,” Edmonds wrote.

Next, she demonstrated her prowess with a weapon. “I sustained my character in a manner worthy of a veteran,” she crowed.

Federal spymasters gave her three days to prepare for her first mission into Confederate-held Virginia. “I purchased a suit of contraband clothing, real plantation style, and then I went to a barber and had my hair sheared close to my head.”

With silver nitrate she dyed her “head, face, neck, hands and arms” black. To test her disguise, she approached a Union postmaster who knew her as a white man.

Edmonds asked the postman to bring her a wig from Washington. The postman did not recognize the apparent black man standing before him and demanded to know what the whig was for.

“No matter, that’s my order,” Edmonds recalled saying. The postmaster agreed to fetch it. Edmonds was confident her disguise would work. Pocketing a revolver, she slipped through the Union picket outside Fortress Monroe and strolled into Confederate lands.

After a cold, sleepless night, Edmonds encountered a group of slaves carrying coffee and supplies to rebel pickets. She fell in with the slaves and wound up as part of a work party building fortifications for the Confederate army.

For two days no one saw through her disguise. While working, Edmonds noted the positions of the Confederate artillery. She sketched a map of the rebel defenses and slipped into her shoe for safekeeping.

On the third day, one of the slaves in Edmonds’ work party looked at her curiously. “I’ll be darned if that fella ain’t turning white,” the man commented. Catching a glimpse of herself in a mirror, Edmonds realized with horror that her silver nitrate skin dye was wearing off. She hurriedly reapplied her disguise.

Returning to Confederate positions, Edmonds observed rebel soldiers gathering around a civilian man. She recognized the man’s voice—he was a peddler who also frequented the Union Fort Monroe.

“There he was, giving the rebels a full description of our camp and forces,” Edmonds recalled. The peddler boasted that he had tipped off rebel snipers to Vesey’s position. “They lost a splendid officer through my means,” the peddler said.

Finally, Edmonds could have vengeance, by warning the Union of the peddler’s betrayal. “I thanked God for that information,” the spy wrote. Handed a rifle and commanded to stand guard, Edmonds instead seized the opportunity to slip away into the forest … and return to her own army.