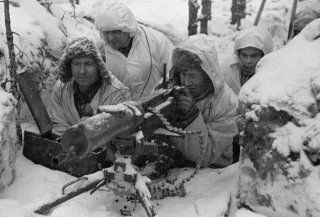 Here's What You Need To Remember: Who won the Continuation War? Both sides could claim victory. The Soviets had redeemed the humiliation of the Winter War with a powerful, well-planned offensive that knocked Finland out of the war. However, Finland had again managed to maintain its independence and remain a democratic nation on the borders of the Soviet Union.

There is much truth to this. The Winter War of 1939–40, in which Stalin invaded Finland to grab border territories and possibly to turn it into a Communist state, was a disaster for the Soviets. The Soviet Union, with a population of 200 million, should not overcome 3.7 million Finns without breaking a sweat. But the Soviet armies, crippled by Stalin's purges, performed so abysmally that Hitler—as well as America, Britain, and France—were convinced that the Soviet Union would collapse like a house of cards after the German invasion of June 1941.

Though the Finns were eventually worn down so much that they ceded the border lands to Stalin, Finland maintained its independence, and also gained the admiration of a world that saw a small, democratic nation standing up to an aggressive bully.

"This time, having learnt the bitter lessons from the Winter War, the Soviets took their attack preparations seriously," notes Finland at War. "The operations on the isthmus were preceded by a thorough phase of reconnaissance and planning. The defenses at the front line were well known to Stavka [the Soviet high command] while spies and extensive aerial photography provided information about positions deep behind the lines."

Yet just as in 1940, the plucky Finns could fight like tigers. By mid-July, the Soviet offensive had been halted. At the Battle of Tali-Ihantala from June 25 to July 9, 1944, fifty thousand Finns repelled one hundred and fifty thousand Soviets backed by 600 tanks, while inflicting three times as many casualties as they suffered. A less robust defense could have resulted in Finland becoming just another occupied Communist satellite like Poland or Romania, but Stalin decided that the price of conquering the Finns was just too high at a time when the Red Army needed all the troops it could get to drive on Berlin.