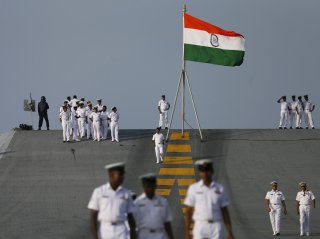 Here's What You Need to Remember: For its part, the Indian army plans to immediately take the offensive under a doctrine called “Cold Start.” Cold Start envisions rapid mobilization followed by a major offensive into Pakistan before the country can respond with tactical nuclear weapons.

The Indian army is the primary land force of the Indian armed forces. The army numbers 1.2 million active-duty personnel and 990,000 reservists, for a total force strength of 2.1 million. The army’s primary tasks are guarding the borders with Pakistan and China and domestic security—particularly in Kashmir and the Northeast. The army is also a frequent contributor to United Nations peacekeeping missions abroad.

The army is structured into fourteen army corps, which are further made up of forty infantry, armored, mountain, and RAPID (mechanized infantry) divisions. There is approximately one separate artillery brigade per corps, five separate armored brigades, seven infantry brigades, and five brigade-sized air defense formations.

Infantry and mountain divisions are mostly assigned to the mountainous North and Northeast regions, where manpower-intensive counterinsurgency and mountain warfare forces are important, while infantry, RAPID, and armored formations sit on the border opposite Pakistan. Perhaps unusually the Indian army has only one airborne unit, the Parachute Regiment, which is actually an umbrella headquarters for army airborne and special forces. The Parachute Regiment controls seven special-forces battalions and three airborne brigades.

The Pakistani army consists of twenty-six combat divisions falling under the control of nine army corps. Most divisions are infantry divisions, with only two armored and two mechanized infantry divisions. Each corps also controls an average of one armored, one infantry, and one artillery brigade each. Not only is the Pakistani army smaller than the Indian army, but it features fewer offensive forces capable of attacking India head-on. Special operations forces are concentrated under the control of the Special Services Group, which controls eight commando battalions.

Kyle Mizokami is a defense and national-security writer based in San Francisco who has appeared in the Diplomat, Foreign Policy, War is Boring and the Daily Beast. In 2009 he cofounded the defense and security blog Japan Security Watch. You can follow him on Twitter: @KyleMizokami. This article first appeared in 2017 and is being republished due to reader interest.

old Start envisions rapid mobilization followed by a major offensive into Pakistan before the country can respond with tactical nuclear weapons.