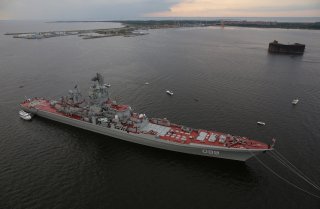 Here's What You Need to Know: Currently only Pyotr Velikiy, the last of the four ships, remains in active service. But unlike some of the white elephants of the Soviet period, the Russians have found a good use for her.

Currently only Pyotr Velikiy, the last of the four ships, remains in active service. But unlike some of the white elephants of the Soviet period, the Russians have found a good use for her. The Russian Navy has used Pyotr Velikiy heavily, showing the flag around the world to demonstrate the continued relevance of Russian seapower. She even conducted antipiracy operations for a time off Somalia, perhaps one of the greatest mismatches between mission and capability in recent memory.