From the Cold War to Syria, the B-1 Bomber Served the Air Force with Distinction 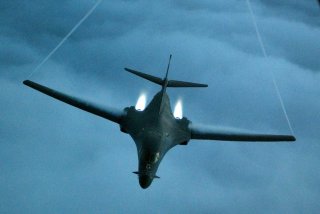 Here's What You Need To Remember: When the last B-1B retires, the United States will no longer have a dedicated bomber capable of supersonic flight—but stealth replaced speed as the key metric of a bomber’s effectiveness some time ago.

The B-1B has impressive specifications. It can make Mach 1.25, although in practice the speed is lower because of altitude and structural stability considerations. It can carry 125,000 pounds of ordnance with a combat radius of roughly 3000 miles. Its service ceiling is 60,000 feet.

Robert Farley, a frequent contributor to the National Interest, is author of The Battleship Book. He serves as a Senior Lecturer at the Patterson School of Diplomacy and International Commerce at the University of Kentucky. His work includes military doctrine, national security, and maritime affairs. He blogs at Lawyers, Guns and Money and Information Dissemination and The Diplomat. This article first appeared several years ago and is being reprinted for reader interest.