Communication Breakdown: Navy Submarines Need a New Way to Talk to Each Other 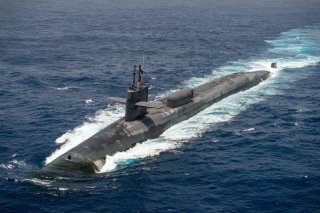 As Navy innovators work intensely to pioneer new methods of undersea communication, many might wish to reflect upon the decades of technical challenges associated with bringing any kind of undersea real-time connectivity to submarine operations. Historically, certain kinds of low-frequency radio have enabled limited degrees of slow, more general kinds of communication, yet by and large submarines have had to surface to at least periscope depth to achieve any kind of substantial connectivity.

Sea water diminishes the power of electrical transmission, challenges identified many years ago by the Navy and some of its partners who have been working on under communication for decades such as Northrop Grumman. Northrop’s efforts date back to the World War II era and, along with the Navy and other industry contributors, helped pioneer the innovations that helped adapt RF communications architecture to sonar today. Considering this history, there are some interesting synergies woven through various elements of undersea warfare radio communications.

A 2014 essay by Carlos Altgelt, titled “The World’s Largest “Radio” Station,” details some of the historic elements of how the U.S. Navy pursued Extremely Low Frequency (ELF) undersea connectivity. Through its discussion of low-frequency ELF connectivity, the essay explains the technical challenges associated with undersea communication, which seem to align with how Northrop Grumman innovators describe how undersea communications will need to largely evolve in the areas of acoustics and optics.

As Altgelt notes: “As a result of the high electrical conductivity of sea water, signals are attenuated rapidly as they propagate downward through it. In effect, sea water ‘hides’ the submarine from detection while simultaneously preventing it from communicating with the outside world through conventional high-frequency radio transmissions. In order to receive these, a submarine must travel at slow speed and be near the surface, unfortunately, both of these situations make a submarine more susceptible to enemy detection.”

Some of the technical challenges and communications form part of the inspirational basis for newer kinds of undersea drones engineered with advanced levels of autonomy, such that they can find, track, detect and even detonate or explode enemy targets, such as sea-mines, without needing human intervention.

As part of this manned-unmanned teaming equation, the Navy seeks to further harness its growing fleet of air, surface, and undersea drones, according to Chief of Naval Operations Adm. Michael Gilday’s CNO NAVPLAN 2021.

“They (unmanned systems) will expand our intelligence, surveillance, and reconnaissance advantage, add depth to our missile magazines, and provide additional means to keep our distributed force provisioned,” Gilday writes.

Gilday’s text brings a few things to mind, as he mentioned drones in the specific context of ISR, something which of course pertains to undersea connectivity and reconnaissance missions. His reference to a “distributed” force also seems quite deliberate, as longer range, higher-fidelity, secure undersea connectivity is crucial to the Navy’s Distributed Maritime Operations strategy, which envisions a disaggregated, yet networked force intended to leverage newer, longer-range kinds of surveillance technologies. This is precisely the kind of tactical circumstance in which unmanned undersea drones can play an integral part, especially when empowered with higher-speed, GPS-like undersea connectivity.