The Complex History of the F-117 Nighthawk 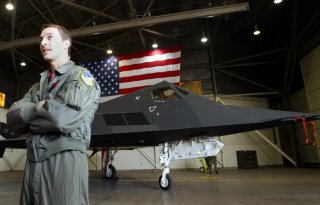 Here's What You Need to Remember: In order to be classified as a “fighter” aircraft and carry that F prefix, a plane usually needs to be designed specifically to be capable of engaging other aircraft in the battle space. The F-117, however, was built specifically for engaging ground targets under a shroud of secrecy.

The Lockheed F-117 Nighthawk, often referred to as the “stealth fighter,” was the world’s first operational stealth aircraft, born out of a program so secretive that the plane itself was flying combat missions for seven entire years before it was formally unveiled to the public. Because of the secrecy surrounding the plane’s development and capabilities, along with some intentional breaches of traditional naming conventions, this stealthy aircraft, and its various names, still spark interest (and confusion) to this very day.

The truth is, this aircraft commonly referred to as the “Stealth Fighter” wasn’t really a fighter at all, but you can’t blame the public for getting this one wrong. Even the Air Force seemed to give this unusual aircraft the wrong designation–and according to some, that may have even been intentional.

But despite lacking in the hardware required for a dogfight, this stealth fighter (that really wasn’t) had a complicated history with air-to-air combat. Capable or not, using the Nighthawk to engage Soviet aircraft was the subject of discussion during development, and at least one Nighthawk pilot has gone on record as saying the platform really could engage enemy aircraft with infrared-guided missiles.

Last month, the long-retired F-117 was spotted in the skies over Fresno, California–apparently participating in some kind of air-to-air training against notably non-stealthy F-15s. It looks as though the Nighthawks weren’t dogfighting, but were rather playing the role of cruise missiles to be intercepted by the Eagles… but this story adds yet another layer of conspiracy-minded intrigue to the rumors about the F-117 actually being a stealth fighter.

Let’s be clear before going any further: It’s not. But there may be some good reason for the rumors.

The F-117 Nighthawk reached initial operating capability in 1983, meaning the platform was already flying some missions in the early 1980s. By 1988, the U.S. Air Force still hadn’t admitted that they had a stealth plane that could defeat enemy radar, opting instead to keep the advanced capabilities of the F-117 a secret. But secrets were hard to keep even in the era before smartphones, and whispers about the unusually shaped aircraft slowly but surely began to make their way to the public.

In 1988, the same year the Pentagon would first admit to having the F-117, images and conjecture about the aircraft had already led to a company releasing a video game about the classified aircraft, using “F-19” as the plane’s name because, well, that’s what people figured the government probably called this new “stealth fighter” they’d developed.

Despite not quite having the design of the aircraft quite right, you can clearly see the lines of the fake F-19 mirroring the lines of the real (and still classified at the time) F-117 in the images below.

The game proved popular among aviation fans, thanks to its realistic approach to flight dynamics, but likely bolstered a misnomer the F-117 has carried with it since the 80’s: despite being called a “Stealth Fighter” colloquially, the F-117 Nighthawk isn’t actually a fighter at all.

The F-prefix in F-117 may suggest that the platform was intended to operate like a fighter jet (like the F-15, F-16, F-35, etc), but in truth, the platform was actually an attack aircraft–meaning it’s official designation should have been A-117 instead (like the A-10 Thunderbolt II or the AC-130 Ghostrider).

In 1962, the U.S. Defense Department established the Tri-Service Aircraft Designation System, which forced all military branches to utilize the same naming conventions and nomenclature for new platforms. While the system has seen updates over the years, the bare bones of it are simple, particularly when it comes to the single-letter prefixes at the start of an aircraft designation.

In order to be classified as a “fighter” aircraft and carry that F prefix, a plane usually needs to be designed specifically to be capable of engaging other aircraft in the battle space. The F-117, however, was built specifically for engaging ground targets under a shroud of secrecy. In fact, the F-117 carried no guns and offered a maximum payload capacity of only two 2,000 pound bombs, making it all but defenseless against enemy fighters in most circumstances.

So why was the decision made to call the stealth aircraft an F-117 rather than an A-117? According to Gen. Robert J. Dixon, who served at Tactical Air Command at the time, the reasoning was simple: The Air Force wanted to court the best and most capable pilots for the new stealth program, and they knew a “stealth fighter” would be more enticing to hot shot pilots than a new “attack” aircraft would be. Even when it comes to classified programs, perception matters.

In an interview on the Fighter Pilot Podcast, retired Michigan Air National Guard Maj. Robert “Robson” Donaldson recalled that the F-117 was technically capable of carrying and firing air-to-air missiles, despite no F-117 ever doing so (at least as far as the Pentagon has admitted). Donaldson’s claims may be the first time anyone has acknowledged that the stealth “fighter” may have actually been able to fight in the air.

“Yes, his primary role was attack but having said that, it could actually carry every munition in the inventory at the time of its insertion, with the exception of the Sparrow missile, which was radar-guided, so we could carry air-to-air missiles,” Donaldson said of the F-117.

The retired aviator went on to outline how there may have even been plans to use the F-117 to engage Russian Airborne Warning And Control System (AWACS) aircraft in the event of a large scale war.

“Our secondary role was to shoot down the Soviet AWACS. So yeah, we were invisible to their radar and we didn’t want them controlling their airspace so, either on the way in or on the way out you could add a Soviet AWACS paint it to the side of your aircraft.”

Thus far, there has been no formal documentation or any other witnesses coming forward who can substantiate Donaldson’s claims. Because the F-117 didn’t carry any onboard radar, it wouldn’t have been able to support radar-guided weapons. However, it could feasibly have operated infrared-guided, or heat-seeking missiles like the AIM-9 Sidewinder. According to some Nighthawk pilots, using these sorts of weapons to engage Soviet airborne early warning and control aircraft (AWACs) really was discussed in the early days of the program, but the aircraft itself was never designed to do so and operational pilots never trained for that mission set.

To make matters worse for those who really wanted the F-117 to be a stealth fighter, the Nighthawk ran largely quiet when prioritizing stealth. That means the aircraft would have no way of spotting enemy fighters (due to a lack of radar) and would have no radio communications to be warned of their presence. Literally, the only way an F-117 pilot could have fired an infrared-guided missile at another fighter is if he or she saw it with their naked eye through the notoriously small viewports the Nighthawk calls a windshield.

And as the United States found out in Vietnam, dogfights within visual range with slower aircraft often involve using guns or cannons–neither of which can be found on the Nighthawk.

Things only get worse from there. In order to engage Soviet AWACs, this “stealth fighter” would have to open its weapons bay doors to fire an internal payload of Sidewinder missiles. Once those doors opened, however, the Nighthawk’s stealth would be compromised, making it an easy target for nearby air superiority fighters or air defense systems on the ground. Because the F-117 was a subsonic aircraft, it couldn’t even throw on the afterburners to make a run for it.

In fact, that’s exactly how the U.S. lost an F-117 in combat operations during the Kosovo War. When the pilot opened his weapons bay doors, a creative enemy commander secured a lock and fired two surface-to-air missiles at him. There was little the pilot could do.

“They were moving at three times the speed of sound, so there wasn’t much time to react,” Col. Dale Zelko, the downed F-117 pilot, said.

“I felt the first one go right over me, so close that it rocked the aircraft. Then I opened my eyes and turned my head, and there was the other missile. The impact was violent…I was at negative seven g’s. My body was being pulled out of the seat upward toward the canopy. As I strained to reach the ejection handles, one thought crossed my mind: This is really, really, really bad."

Believe it or not, Lockheed did have plans for an F-117 that really would have been a stealth fighter, but they didn’t offer it to the Air Force. In 1993, four years after the U.S. Air Force unveiled the Nighthawk to the world, Lockheed approached the U.S. Navy with a proposal for a carrier-based iteration of the jet. This new F-117N Seahawk would be a low-observable (stealth) all-weather strike aircraft with legitimate air-to-air capabilities.