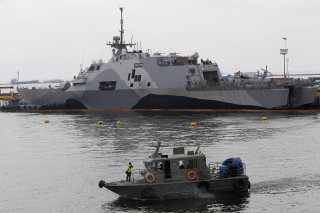 Here's What You Need To Remember: Fortunately, the U.S. and China aren't at war, and don't (yet) appear to be headed in that direction. This means that predictions for how a war might unfold are fairly abstract, so it's important to take simulations like this one with some skepticism. However, it's still a worrying development.

It’s a gamble because Littoral Combat Ships are not well-protected against anti-ship missiles, having only their 57-millimeter guns and Rolling Airframe missile launcher mounts. I believe Qinzhou is out of anti-ship missiles. Changde might still have all of her missiles, but she’s also taken serious damage trading shots with Emilio Jacinto.