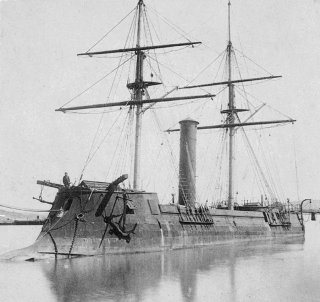 Here's What You Need to Remember: The warship spent the next two years in the Washington Navy Yard, until it was seen by a Japanese purchasing agent that had been sent by the Japanese Tokugawa shogunate to America. While a sale of the ironclad was concluded, the United States government initially stopped the transfer and claimed neutrality in the Boshin War between the shogun and the pro-Imperial forces.

It has long been common for aging warships to be retired but then sold to another nation for continued service – and that was certainly true of many combat vessels built during the Second World War as many navies downsized in the years following. However, during the American Civil War, there was a warship built by the French for the Confederacy, offered to Denmark, and later used by the Japanese.

While the warship in question didn't see much in the way of notable action, it certainly served under a number of naval ensigns. The vessel began her career as the Sphinx, which was in reality a cover name used by the builders at Bordeaux, France to keep the true buyers of the ship a secret.

The Age of Iron

The success of the ironclads in combat had been recently proven at the Battle of Hampton Roads in March 1862, and in 1863 John Slidell, the main Confederate States of America commissioner to France, personally asked the French Emperor Napoleon III if France could build ironclad warships for the CSA's war effort.

Knowing this was illegal under French law at the time, the Emperor agreed on the condition that the actual destination remained a secret. Construction began soon after the covert meeting on two ironclad rams that could operate in shallow waters against larger warships. Each of the two vessels would only carry three guns, but the concept was to actually ram the wooden warships of the United States Navy and thus break the blockade of the Confederate States.

The main armament was a single 300-pounder Armstrong rifle muzzle-loading (RML) gun located in the bow turret, while a pair of 70-pound RML guns was positioned in the oval fixed turret. While the ships might be outgunned by the wooden Union fleet, the armor on the two vessels was also designed to withstand cannon fire from 15-inch guns. Clearly it was thought that the warships could easily stand up to the Union blockade and allow the Confederates to export cotton and import weapons and other equipment for the war effort.

Made in France But For Whom?

To help maintain the secrecy of the French plan, the guns were manufactured separately from the two ships – while the vessels were "named" Cheops and Sphinx, which was part of a deception effort that suggested the ships were intended for the Egyptian Navy.

All was going as planned until in the fall of 1863, U.S. Minister to France William Dayton received stolen papers from the Nantes shipyard in Bordeaux, and those papers confirmed the ships were in fact being built for the Confederacy. The vessels were completed, but Paris received strong protests from Washington, and Emperor Napoleon III – who was dealing with his own share of domestic and foreign problems – decided to wash his hands of the whole affair.

The French Emperor ordered that new customers be found for the ships, but that is where the first strange twist of fate occurred.

Cheops was sold to Prussia, which renamed her Prinz Adalbert, while Sphinx was sold to Denmark and named Stærkodder. This was notable as the nations were fighting on opposite sides of the Second Schleswig War and it was all but anticipated that the ships might face each other in battle.

That was not to be however, as Sphinx/Stærkodder failed to reach Copenhagen before the war ended and Denmark decided it didn't need the ship, and opted to sell her to the Confederacy after all. On January 6, 1865 in Copenhagen the ship took aboard a CSN crew under the command of Lt. Thomas Jefferson Page, and the warship vessel began its trek.

It was slow going in no small part because she was designed to operate on the coast and in rivers, not the open sea. Despite the fact that the ship had seen no action, Page wisely decided to have the ship undergo maintenance in a neutral port and set course for Spain.

While in Spain undergoing repairs, the Union frigate Niagara and the sloop-of-war Sacramento attempted a blockade. However, this was the exact situation the newly minted CSN Stonewall – named for the famous Lt. Gen. Thomas "Stonewall" Jackson – was designed for, but in the end, there was no test of her ramming abilities. Fearing that the ironclad had the advantage, the wooden-hull vessels backed down, and Stonewall was able to make for the open ocean.

Despite being designed to operate primarily in littoral waters, the Atlantic crossing was apparently uneventful and Stonewall reached Havana, Cuba in May 1865. The ship had arrived too late – the CSA had surrendered.

Learning that the war was over, Lt. Page turned the ship over to the Spanish authorities, who paid the sum of $16,000 to cover the crew's wages. It took until November 1865 for the United States to finally reimburse Spain and subsequently took charge of the vessel. With a small crew, Stonewall sailed under the U.S. Navy ensign.

With the war over the United States Navy was downsizing and had no need of a French-built ironclad. That could have been the end of the story, but another twist of fate occurred.

The warship spent the next two years in the Washington Navy Yard, until it was seen by a Japanese purchasing agent that had been sent by the Japanese Tokugawa shogunate to America. While a sale of the ironclad was concluded, the United States government initially stopped the transfer and claimed neutrality in the Boshin War between the shogun and the pro-Imperial forces.

With the Meiji victory, which brought Japan back under the control of the Emperor, the vessel was handed over to the Japanese government and renamed Kōtetsu (meaning "iron-covered ship"). While serving in the newly created Imperial Japanese Navy, Kōtetsu finally proved to be a "formidable weapon." She was used against the Tokugawa Shogun at the Battle of Hakodate, destroying the last of the antiquated rebel fleet.

Kōtetsu remained in service as the first ironclad of the IJN, and reportedly the sight of the ship struck fear into Chinese sailors, who didn't want to risk taking on the warship during a period of tension between the two Asian nations. Yet, by just 1870 advances in technology meant the vessel was reclassified as a third-class warship and she was renamed a final time to Azuma. After which she was assigned to guard the port at Nagasaki during the Saga rebellion. She was finally stricken from the navy list in January 1888 and sold as scrap. It was an undignified end to a warship with a colorful if not exactly illustrious career.

Moreover, the ironclad that was built for the CSA could be seen as the vessel that served as the original foundation of IJN and set it on a path that would take it towards Pearl Harbor, but also the IJN's eventual destruction.