In a Conflict With China, Japan Wants F-35s 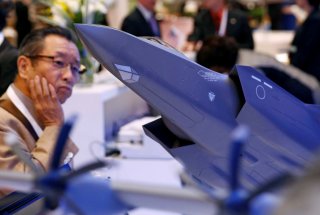 Here's What You Need To Remember: The effect of having F-35s would not only improve Japan's direct air capabilities. It would also make China think twice about any operation that could leave its own airspace underdefended.

It is self-evident and well known that the U.S. and Japan want to be ready for war with China, for the specific purpose of keeping peace and stability in the pacific, a goal which was recently strengthened through joint U.S.-Japanese training operations in the region.

The USS America, a first in class new generation of Amphibious Assault Ships for the U.S. Navy, was conceived and specifically engineered to accommodate the F-35B Vertical-Take-off-and-Landing Marine Corp variant of the F-35. The U.S.-Japan combat preparation, therefore, means direct and datalinked secure connectivity between each countries’ F-35s.

“America is a fifth-generation amphibious assault platform, built from the keel up to optimize the most advanced capability of the fifth-generation F-35 platform. We are forward-deployed to integrate exactly these advanced capabilities with Japan,”  Capt. Luke Frost, America’s commanding officer, said in a Navy statement quoted in SeaPower Magazine.

Japan Air Defense Command F-35s bring new dimensions to deterrence in the Indo-Pacific, particularly given the vast array of island and coastal areas. Japan is certainly well within the range of the South China Sea and also able to base it's Conventional Take-Off and Landing F-35s at strategic locations of great significance throughout the region given the large sphere of U.S. and Japan-allied countries in the Indo-Pacific theater.

Given the well known and often discussed “tyranny of distance” in the Pacific, often referred to as a vast geographical expanse, larger numbers of F-35 aircraft could have a substantial tactical impact. This pertains to the prospect of bombing missions as well air-to-air attack, close air support and, perhaps of greatest significance, ISR.  The F-35s drone-like sensor technologies and data-link connectivity between 5th and 4th-Gen aircraft can help cover seemingly unreachable amounts of ocean and island areas.

High numbers of drones, surveillance planes, ships and even ground-based radar sensors can, if sufficiently networked, help engender a sweeping “kill web” across massively dispersed areas. Interestingly, even with increased U.S. - Japan interoperability and numerous surveillance assets, there still may be a demand for more ISR. The demand for ISR is considered truly insatiable, with no signs of slowing down.

Finally, U.S. amphib-F-35 connectivity with Japanese F-35s introduces new tactical advantages in any kind of possible military engagement with China. Initially, the presence of Japanese F-35s not only simply increases the size of the attacking force but also brings more stealthy, armed attack platforms able to operate in hostile or contested airspace above China. This could make Chinese air defenses more vulnerable and allow F-35s to help achieve air supremacy with long-range targeting sensors.  It is also sensible to assume that both Japanese and U.S. F-35s have cataloged threat data information specific to Chinese aircraft in their respective mission data files library.

Dispersed approaches, using air-ground coordination and forward-positioned surveillance nodes, can increasingly use synchronized assault tactics, pinpointing advantageous areas of attack. Not only can this exploit enemy weakness, but it also brings the advantage of avoiding more condensed or closely-configured approaches far more vulnerable to long-range enemy sensors and weapons.