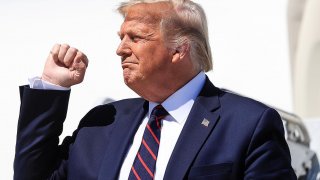 After negotiations on the next round of stimulus went nowhere in early August, President Trump’s August 8 executive order offered states a way to continue providing extra unemployment benefits despite the late-July expiration of the $600-per-week federal bonus. His plan allows states to use already-provided federal stimulus funds to continue $300-per-week federal bonuses, matched (nominally, we subsequently learned) by $100 in state funds. That de facto $300 per week supplement to regular state unemployment checks was less than the prior $600, but well more than what would otherwise be payable as stimulus negotiations continue to falter — that is, zero.

Some governors were initially unimpressed. For example, here’s what California Governor Gavin Newsom thought about President Trump’s plan on August 10:

The state “cannot shoulder this burden without cutting important services,” he said.

What a difference a few days makes.

With states seeing little progress in the stimulus talks in DC, and facing a September 10 deadline for opting into the administration’s substitute, the Department of Labor on August 18 announced that seven states (Iowa, Arizona, New Mexico, Louisiana, Utah, Colorado, and Missouri) have been approved to operate the administration’s $300 bonus program. Arizona already started paying the $300 bonuses this week. And Montana and Oklahoma were subsequently approved, bringing the total approved to nine states. A similar number of states have said they plan to come on board. According to an Associated Press survey, that includes California:

California Gov. Gavin Newsom, a Democrat, is among governors who are critical of Trump’s approach but decided to take the deal anyway. “As I say, don’t look a gift horse in the mouth,” Newsom said last week.

Only two states have rejected the offer, and the AP survey notes “30 states have said they’re still evaluating the offer or have not said whether they plan to accept the president’s slimmed-down benefits.” If stimulus negotiations in DC continue to go nowhere, many of them may decide against looking a gift horse in the mouth, too.

This article by Matt Weidinger first appeared in AEIdeas on August 20, 2020.