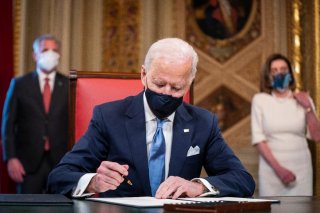 By the time Joe Biden was inaugurated as the 46th president yesterday, every member of President Trump’s cabinet had resigned. That’s customary when a new president takes office. Because none of President Biden’s nominees to fill his cabinet have yet been confirmed by the Senate, all fifteen cabinet‐​level departments are currently being led by “acting secretaries.” These acting secretaries serve either by virtue of succession statutes specific to particular departments or by virtue of the “Vacancies Act,” a law that gives the president broad discretion to fill vacancies across the federal government with “acting officers” (but places time limits on their service).

This raises constitutional concerns because the Appointments Clause of the U.S. Constitution requires that all “officers of the United States” must be confirmed by the Senate. There is only one exception to this rule, an exception for “inferior officers.” The Constitution allows Congress to decide that a particular inferior officer can be appointed by the president unilaterally, without Senate consent. That means if these acting cabinet secretaries are only “inferior officers,” then their selection without Senate consent is permissible. But the Supreme Court has explained in a case called Edmond v. U.S. that inferior officers are “officers whose work is directed and supervised at some level by others who were appointed by” the president. And acting cabinet members, just like permanent cabinet members, have no supervisor except the president himself, which means it is hard to explain how they could be “inferior officers” under this definition.

This issue was pointed out by Justice Clarence Thomas in a 2017 concurring opinion in a Vacancies Act case. Although the full court didn’t address any constitutional question in that case, Justice Thomas wrote that appointing acting officers to top‐​level positions “raises grave constitutional concerns.” And further attention was brought to this issue in November 2018, when President Trump appointed Matthew Whitaker as acting attorney general despite Whitaker serving in a non‐​Senate‐​confirmed role.

Defenders of the constitutionality of acting cabinet secretaries point to an 1898 Supreme Court case called U.S. v. Eaton. In Eaton a person had been selected, without Senate consent, to temporarily serve as an acting consul general while the permanent consul general was seriously ill. The Supreme Court held that this acting service was constitutional because the acting consul general was only a subordinate officer “charged with the performance of the duty of the superior for a limited time, and under special and temporary conditions.” But Eaton is in tension with the more recently decided case of Edmond. Eaton seems to take a more functionalist approach to the Appointments Clause; it speaks of a worry that “the discharge of administrative duties would be seriously hindered” by a stricter rule requiring Senate confirmation. By contrast, Edmond is a firmly originalist opinion by Justice Scalia based on the original meaning of “inferior officer.”

It’s likely that the Supreme Court will eventually have to take up a case on the constitutionality of acting officers in top‐​level positions and reconcile the tension between Eaton and Edmond. Until then, we’re left unsure whether nearly all the current members of the cabinet are unconstitutional. For a recent discussion of this and other issues related to the Vacancies Act and the presidential transition, you can listen to my appearance on this Federalist Society podcast. I’ve also explored this question previously at greater length, as has the Office of Legal Counsel, which came to a contrary view.