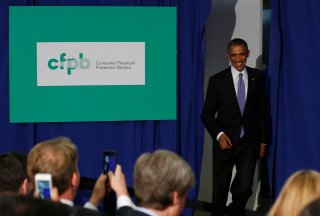 One of the Constitution’s chief protections for individual liberty is the separation of powers. The legislative power is granted to Congress, the judicial power to the courts, and the executive power to the president. This division cannot be altered by anything short of a constitutional amendment.

This past June, the Supreme Court took a step toward limiting independent agencies by holding that the structure of the Consumer Financial Protection Bureau violated the separation of powers (Seila Law LLC v. CFPB, in which Cato filed an amicus brief). The CFPB, created in 2010, was even less accountable to the democratically elected branches because, unlike the independent agencies of the 20th century, headed by multi‐​member commissions, the CFPB is headed by a single director who was removable only for cause. The CFPB director had unilateral authority to enforce 19 federal laws. In Seila Law, the Supreme Court severed the for‐​cause protection for the CFPB director, bringing the bureau in line with traditional executive agencies.

While Seila Law made clear that the CFPB has been operating unconstitutionally since its inception, it left undecided what that ruling means for the many litigants who filed lawsuits challenging the CFPB’s structure. All American Check Cashing, a check‐​cashing and lending‐​services company, falls into this category. When All American was targeted by a CFPB enforcement action in 2016, it argued that this investigation was void because the bureau’s structure violated the Constitution. Cato filed an amicus brief supporting All American’s case before the U.S. Court of Appeals for the Fifth Circuit.

Now that the Supreme Court has vindicated All American’s arguments, all the judges on the Fifth Circuit, in a special en banc sitting, will have to determine what happens to the bureau’s enforcement action. The CFPB argues that its process can continue because it has been “ratified” by its director—now removeable at‐​will post‐Seila Law—while All American argues that the investigation must be dismissed.

Cato has now filed a brief supporting All American’s request for the Court to dismiss the enforcement action. We argue that allowing the CFPB to carry on with unconstitutionally initiated actions would perpetuate the earlier constitutional violation. An illegitimate exercise of power cannot become legitimate through after‐​the‐​fact ratification.

Failing to dismiss the enforcement action would also undermine a key historical protection of the separation of powers: private litigation. Meaningful remedies for litigants are necessary to incentivize people to continue to bring suits that safeguard the Constitution’s structural protections. If even winning your separation‐​of‐​powers claim doesn’t dismiss the enforcement action against you, why file suit to begin with?

The purpose of the separation of powers is to protect liberty. The remedy for a separation‐​of‐​powers violations should, accordingly, protect liberty as well. In this case, that remedy is clear: dismissal of the unconstitutionally initiated enforcement action.

This article first appeared on the Cato Institute's Cato At Liberty blog.