Convair’s Sea Dart: Why the World's Only Supersonic Seaplane Failed 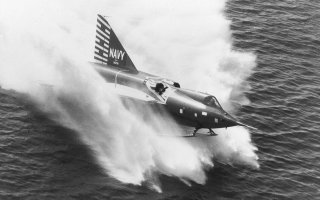 Here's What You Need to Know: The Sea Dart program was ultimately unsuccessful.

Convair’s Sea Dart couldn’t land on aircraft carriers—but it could land in the ocean next to them. It was also the only seaplane to exceed the speed of sound.

In the late 1940s, there was a mismatch between jet-powered airplanes and aircraft carriers. Early jet planes were considered ill-suited for operations on aircraft carriers. They generally needed longer takeoff runways, landed at high speeds, and usually had poor handling characteristics at low speeds. Those handling issues could potentially be dangerous for both pilot and flight deck crew during normal sea conditions, not to mention when a flight deck pitched and rolled during less-than-perfect weather. The Sea Dart was designed to address this issue.

In 1948, the U.S. Navy issued a tender for interceptors that could operate from sea. Convair’s entry was a fighter with a delta wing and highly placed engines. Instead of landing on aircraft carriers, the Sea Dart would land on the water, using a pair of retractable hydro skies that extended before landing, and just before takeoff.

Dive brakes on the bottom of the fuselage were also used as water brakes just after landing on the water. When on water, the Sea Dart could use the brakes as a rudder for steering. Its engines were placed high up on the airframe to prevent them from ingesting water when landing or taking off.

Ultimately only a handful of prototypes were ever built. Though later prototypes were incremental improvements on the preceding airframes, there were a number of limitations that were never adequately sorted out, which contributed to the Sea Dart’s cancellation.

The first was excessive vibration in the water skies when taking off and landing. Despite dampener being fitted in between the skies and the airframe which improved handling, the issue was never completely resolved.

The airframe also suffered from excessive drag at transonic speeds. This prevented it from flying supersonically in most circumstances, hindering usefulness as an interceptor aircraft, which required high speeds.

The Sea Dart also had underpowered engines, which were part of the reason it could not fly supersonically. Though replacement engines were fitted to later Sea Dart prototypes, performance remained lackluster. If the Sea Dart entered a dive however, it could just break this limitation, making the Sea Dart is the only seaplane to have exceeded the speed of sound.

The Sea Dart program was ultimately unsuccessful. During a flight demonstration for U.S. Naval officials, a test pilot passed the Sea Dart’s never-exceed speed, and the airframe disintegrated over the ocean near San Diego, killing the pilot. Another factor that doomed the program was advances made in supersonic planes’ subsonic flight stability. This solved the issue of aircraft carrier landings, though both factors effectively killed the Sea Dart program. Several prototypes are on display at various museums across the United States in California, Pennsylvania, and Florida.