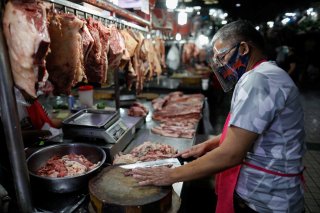 While parts of East Asia have long been home to meat-intensive diets, the last couple of decades have seen the production, trade and consumption of meat increase dramatically. The region is undergoing a dramatic process of what geographer Tony Weis has dubbed ‘meatification’. This change has led to the emergence of an Asian ‘meat complex’ tying Asian countries to each other and to the larger world through the medium of meat commodities and their feedstocks.

The COVID-19 pandemic has large ramifications for the Asian meat complex. While the pandemic contributes to reconfiguring and challenging the meat complex at a moment of vulnerability, it also seems to be strengthen existing trends towards stricter hygiene control, supermarketisation and increased industrialisation of meat production.

China’s rapid increase in production, trade and consumption of meat is well-known — the boom has even had geopolitical implications, especially in the trade of Latin American soybeans to feed the Chinese pork sector. Per capita meat consumption increased almost six-fold in the four decades following the initiation of market reforms in 1978, alongside massive increases in domestic meat production and imports.

The ‘China factor’ may overshadow other aspects of meatification in Asia, but several other countries are also witnessing meat booms — Japan, South Korea and Vietnam have all seen dramatic increases in per capita meat consumption. Vietnam has developed into a major meat-producing country, surpassing Japan and Thailand in terms of tonnes of meat produced.

Asian meatification takes form through changing diets, new trade flows and new cropping patterns. Meat is increasingly traded intra- and inter-regionally. Much of the meat consumed in Southeast Asia is produced in the region, largely through industrialised systems dependent on imported animal feed. This has led to new flows of grain and oilseed crops, both within Asia and between Asia and Latin America.

The Asian meat complex is increasingly shaped by large corporations — not only by Western multinationals, but also by emerging Asian agribusiness companies. Charoen Pokphand, a meat-processing company, is now Thailand’s largest private company, with considerable investments across Asia.

There are signs that meat demand is decreasing globally. China is a major contributor, consuming about one quarter of all meat in the world. In China, as in many other places, the pandemic and its link to meat markets has intensified distrust of animal-sourced food. Consumers have cut back on grocery bills while supply systems have been disrupted. People are also eating out less due to the pandemic, and it is well established that we eat more meat at restaurants than when we cook at home.

Analysts from Rabobank foresee a downturn in meat consumption across Southeast Asia, leading to reduced demand for grain and oilseed crops. Changes in one aspect of the meat complex might cause reverberations across an interconnected web of agricultural practices and trade flows.

COVID-19 is not the first zoonotic disease to hit the Asian meat complex. African swine fever has been spreading across the region since 2018, leading to the death and culling of 100 million pigs in China and 6 million in Vietnam, one third and one quarter of their respective pig populations. COVID-19 has hit the Asian meat complex at a moment of vulnerability, which may deepen its impact.

But it’s not all gloom and doom for the Asian meat complex, as it seems likely that COVID-19 will strengthen ongoing trends. A trend towards eating less meat has existed alongside global meat booms, even within Asia. It is too early to tell whether this will lead to lasting change or if the meatification of Asian diets will be back on track after the pandemic passes.

High levels of meat consumption in affluent countries around the world depend on cheap, factory-farmed meat. In many Asian countries, meat imports from large producers such as the United States and Brazil are increasingly competing with local produce. It can indeed be cheaper to buy chicken that has travelled around the world than to buy chicken produced by your neighbours.

The pandemic is likely to strengthen existing tendencies towards stricter food controls and hygiene requirements from producers and retailers. While beneficial to public health, this will likely favour large-scale meat production. Local markets, an important food source for billions of people, are under increased pressure due to the pandemic, as are small-scale producers. Large agribusiness, meanwhile, is well placed to increase its market control, usurping or outcompeting smaller operations along the way because of stricter quality controls.

While there is a need for more sustainable meat production following the pandemic, COVID-19 will likely intensify the industrialisation of meat — ironically, making the world more vulnerable to future pandemics.

Arve Hansen and Jostein Jakobsen are researchers at the Centre for Development and the Environment, the University of Oslo.

This article is part of an EAF special feature series on the coronavirus crisis and its impact.