Coronavirus: Canada is Not Immune to the Anti-Mask Movement 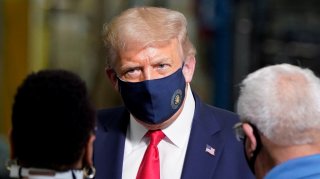 The Canadian response to the COVID-19 pandemic is widely seen as standing in sharp contrast to the situation in the United States.

We would be remiss, however, to overlook the resemblance between the recent protest in Montréal against mandatory mask usage and anti-mask protests taking place across the United States.

The similarities may indicate that the ideological chasm that has defined the American COVID-19 experience is making its way north of the border.

The use of masks as a preventive measure against COVID-19 has divided Americans along partisan lines since the Centers for Disease Control and Prevention (CDC) first issued its recommendation to wear cloth masks on April 3. President Donald Trump immediately rebuffed any suggestion he should wear one and set the stage for masks as a subject of political polarization.

In Canada, the choice to wear a mask ostensibly does not carry the same political connotations that it does in the U.S.

Recent findings from my organization, Vox Pop Labs, and our COVID-19 Monitor, indicate that 83 per cent of Canadians currently wear masks as part of their normal routine, compared to 67 per cent of Americans. The COVID-19 Monitor is one of the largest ongoing studies of public opinion on the coronavirus in Canada.

In Canada, measures to contain COVID-19 have generally been less contested by politicians, and trust in the guidance offered by public health officials has remained consistently high.

A study I co-authored as Canadian provinces began declaring states of emergency in response to the COVID-19 pandemic found that most Canadians, regardless of their politics, exhibited similar levels of compliance with emergency orders.

The study also found, however, that perceptions both of the threat of COVID-19 and the effectiveness of the government response were tinged by partisanship.

In the months since that study was published, we have witnessed a dramatic rise in the rate of mask usage among Canadians, but we’ve also observed signs of partisan splintering.

Data from the COVID-19 Monitor show that early adopters of masks spanned the partisan gamut — the only notable exception being Bloc Québecois supporters, who lagged behind other Canadians in their uptake of masks but now sit on par with Liberal, NDP and Green voters.

The trend among Bloc Québecois voters speaks to their nationalist inclinations more than it does to conventional left-right ideology. The Québec government was initially quite reticent to accept revised guidance on masks from federal public health officials. But it ultimately endorsed the recommendation on masks after several weeks, and later became the first province to make them mandatory.

The pattern among Bloc Québecois voters reflects their deference to the Québec government and how they follow its guidance quite closely.

The more interesting standout in this analysis has to do with conservatives. During the first several months of the pandemic, supporters of the Conservative Party of Canada were relatively indistinguishable from other Canadians in terms of their mask usage, suggesting a cross-partisan consensus on masks early on in the pandemic.

But by early June we observe a clear divide between Conservative voters and other Canadians in relation to mask usage — a divide that appears to be widening over time.

We see the divide in mask-wearing habits even more clearly when we segment Canadians by ideology. Again, at the outset of the pandemic in mid-March, there was no correlation between mask usage and ideology. As the pandemic draws on, however, we see clear differences between left- and right-wing Canadians in terms of mask usage, with 94 per cent of left-wing Canadians reporting that they have adopted masks as part of their normal routine compared with only 68 per cent of Canadians who identify as right wing.

It’s important to note that the vast majority of right-wing Canadians are still wearing masks, but what’s concerning is that the divide between the two groups has increased over time.

It’s also important to note that these findings do not necessarily indicate that partisanship or ideology are the primary determinants of mask adoption among Canadians.

For example, Canadians tend to draw on different information sources depending on their political views. Previous research from the COVID-19 Monitor has demonstrated that Conservative supporters are more likely to endorse conspiracy theories about COVID-19, which may reflect a reliance on different news media.

It seems unlikely that the varied uptake of masks between Canadians on either end of the ideological spectrum is an exclusive reaction to partisan cues given the relative solidarity among Canada’s political leaders.

Even Trump wears a mask sometimes

Even if right-wing Canadians are taking their lead from their counterparts south of the border, they are not necessarily parroting the behaviour of Trump. The U.S. president has recently done an ostensible about-face on masks, donning one himself in late July and endorsing them as “patriotic.”

Perhaps it’s too early to tell if this will have a mitigating effect on the partisan splits in mask-wearing habits among Americans, or if right-leaning Canadians will follow suit.

But for the time being, there is no indication that the difference in mask usage among Conservatives relative to other Canadians is dissipating — if anything, it continues to increase.