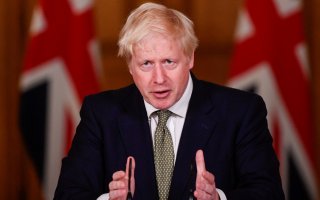 Have you heard the story about the cowboy who tried to ride two horses at the same time? Everything is fine while the horses happily gallop along in the same direction but as time goes on, each horse wants to head in a different direction. It becomes harder and harder harder for the cowboy to hold them together. After a while the pressure to part company becomes too great and a painful rupturing occurs. The cowboy falls to the ground and the horses run off into the sunset, never to be seen again.

The more I see Boris Johnson looking befuddled and bewildered as he grapples with the COVID crisis, the more I think of him as that cowboy sitting astride two horses. He is hurtling down a rocky pass knowing that the challenge beneath him risks ripping him apart.

In Johnson’s case, his horses are two key areas of national policy – a healthy economy weighed up against the health of society. Johnson, a man who is (in)famous for trying to have his cake and eat it, has jumped on both horses and is now whipping them frantically for fear of allowing either one to lose.

The problem is that no politician can triumph in the “cowboy challenge”. Those who attempt such risky rides are almost always destined to come a cropper.

And Johnson has indeed come a cropper. His attempt to foster public clarity through a new three-stage framework succeeded only in sowing more confusion. His dealings with the regions left Liverpool feeling cheated, Lancashire feeling bullied and Manchester angrily determined not to be “the canary in the coal mine” used to test the toxicity of the social and economic impacts of further tight restrictions. In the past week, territorial fissures and fault lines that have, if we are honest, existed for decades, cracked wide open.

The government’s strategy of seeking to protect both the public’s health and the economy is a political hybrid that does not suit the moment. Politics in normal times is defined by compromise and the messy accommodation of competing pressures. But in times of crisis, the most efficient response is to pick a clear objective and to focus upon it with unwavering energy.

In trying to protect the economy and the public’s health Johnson risks heading for a painful fall, fulfilling neither ambition. The challenge of balancing both has already been seen in the whiff-whaff, flip-flop, stop-start tendencies of the government, which have in turn led to falling levels of public confidence and growing evidence of crisis fatigue.

Whether you view the government’s position from a charitable perspective and as reflecting the inevitable muddle and mistakes that will come with coping with crisis, or you more harshly see a confederacy of dunces who don’t quite know where they’re going or why, is neither here nor there. What matters is that a route from chaos to clarity is mapped out soon.

When Britain was first put in lockdown in March, Boris Johnson was explicit: the government would “follow the science”. A few months later, the talk was more of being guided by the science.

Now it not only appears that the government is becoming distrustful of “the experts” but the broader scientific base is itself fundamentally divided, with an increasing polarisation appearing between those who favour a focus on herd immunity, and those who suggest that this is dangerously flawed and instead favour tighter social restrictions.

The problem is that Johnson’s need to be liked means taking tough decisions and seeing them through is not his forte. And yet when it comes to COVID, there are no technological solutions, no silver bullets or simple answers to complex questions.

Major decisions will have to be taken on the basis of imperfect information and with no guarantee of success. There’s no guarantee a vaccine will be found, and “vaccine hesitancy” might ensure that an insufficient proportion of the public will agree to take it. This is the real world of hard life-or-death politics, but doing nothing is not an option.

The trick that Johnson has for some reason failed to master is how to turn a disaster into an opportunity. Adopting an emphasis on “herd immunity” is just too dangerous, but for a prime minister whose political life and legacy is now so clearly intertwined with making sure the new “blue wall” in the midlands and north of England does not revert to its traditional colours, the opportunity revolves around somehow linking the COVID strategy with the “levelling-up” agenda. Labour voters “lent” Boris their support – as he fully knows - on the basis that he would tackle economic inequalities across England.

Grasp the opportunity to come good on that bargain. Give Manchester mayor Andy Burnham his money, listen to Sheffield mayor Dan Jarvis, engage with Liverpool mayor Steve Rotherham, sprinkle the financial fairy dust and facilitate a tough lockdown in a way that nurtures a vibrant economy.

The choice is therefore less about choosing one horse over another, so much as defining a thoroughbred policy in which financial investment is used to “lock” lockdown tightly but in a manner that protects the most vulnerable, listens to communities, and looks to shape a very different post-COVID Britain.

I’ve always thought that Johnson was a bit of a cowboy but the time has come to replace chaos with clarity.

Matthew Flinders, Founding Director of the Sir Bernard Crick Centre for the Public Understanding of Politics, University of Sheffield