Coronavirus Disinfo: These Two Tweets Could Be the Key to Understanding China's Propaganda Campaign 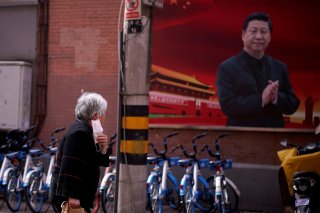 An Israeli data firm reportedly believes two innocuous-looking tweets praising China’s response to the coronavirus pandemic in March collected too much attention on Twitter to dismiss out of hand the possibility that a massive social media influencing campaign promoted them.

Israeli data firm Next Dim located two tweets from pro-China accounts with small followings that were liked and reposted hundreds of thousands of times in March, according to a New York Times report Monday discussing the group’s findings. Next Dim’s findings raise the potential that a giant crew of social media influencers intervened to help the tweets go viral, the report noted.

The tweets gathered too much attention for Next Dim to chalk them up to chance, according to TheNYT’s report on China’s Twitter campaign.

Next Dim located a March 12 tweet from user @manisha_kataki, who posted a video of workers spraying streets in China with disinfectant and wrote: “At this rate, China will be back in action very soon, may be much faster than the world expects.”

Another user with the handle @Ejiketion retweeted the post along with the video the next day, telling his Twitter followers that Westerners are meanwhile “washing our hands LOL.” The account has since been deleted, according to TheNYT. Both tweets received more than 382,000 retweets and 1.1 million likes, many of them within the first two days.

Next Dim found evidence suggesting the tweets’ spread was not organic.

Only a handful of the users who were the first to retweet @manisha_kataki were followers, meaning they very likely never saw the content on their timelines, where most people find and retweet posts. Thousands of accounts that reposted both tweets also retweeted both accounts.

Next Dim has not responded to the Daily Caller News Foundation’s request for comment.

TheNYT’s report came amid separate media reports showing how Chinese state officials are using Twitter as a misinformation weapon. One of China’s top spokesmen led an army of Chinese officials on Twitter elevating conspiracy theories suggesting the U.S. military started the coronavirus pandemic, according to data collected by the Alliance for Securing Democracy.

China’s deputy director of the Foreign Ministry’s Information Department Zhao Lijian was one of the first Chinese officials on Twitter to push a theory suggesting the virus originated at a U.S. Army base that houses and researches infectious diseases. The theory accelerated after Chinese embassy accounts in France and Jordan retweeted Zhao’s post, the data showed.

Zhao tweeted in early March that, “It might be the US army who brought the epidemic to Wuhan.” He also falsely suggested in the tweet that Centers for Disease Control and Prevention Director Robert Redfield was “arrested.” Officials believe coronavirus, or COVID-19, originated in Wuhan, China, before spreading worldwide before reportedly killing 110,000 people in the United States.

Zhao doubled down the next day, telling his Twitter followers on March 13: “Further evidence that the virus originated in the US,” before linking to a blog post suggesting the virus leaked from Fort Detrick, a U.S. military base that houses a facility where experts research infectious diseases. This tweet has been retweeted more than 12,600 times and liked 20,000 times.

The spokeswoman did not provide a reason for speaking anonymously, but Twitter’s press office often requests anonymity when speaking to journalists.