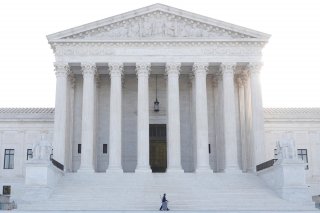 Not every effect of the pandemic has been negative: The public has been able to hear live arguments of the Supreme Court in a new format that raised the level of discussion.

The court’s oral arguments are some of our nation’s most important public debates. But they used to be conducted in a way that made them chaotic and hard to follow. Now, under the new format, the arguments are organized in a way that, as a scholar of the Supreme Court, I believe makes them better and more accessible.

I fear, however, that these accidental reforms may last only for the pandemic’s duration.

More frequent and more informed public debate over constitutional controversies would connect citizens to our founding document, raising their expectations of what it provides as well as their sense of responsibility in preserving it. More directly, presidential campaigns focus more now on nominations to the court – and hence the future of constitutional debate.

But the inaccessibility of the Supreme Court has not fostered constitutional politics.

During the last 50 years, arguments in front of the court have been mostly on paper in long legal briefs, with advocates for each side given only a half-hour each (one hour total for each case) to present an argument and field questions. An ordinary citizen could look up the written transcripts on the court’s website a few days later or wait for an audiotape in about a week.

Surprisingly, those arguments used to be quite bad. There were constant interruptions of the lawyers by the justices, and of the justices by other justices. Questions were formed poorly on the fly as justices verbally elbowed each other out of the way to have their concerns addressed. It was often a kind of verbal melee that flailed at each side’s armor but rarely penetrated to the flesh of the argument.

When the pandemic forced the Supreme Court to shut down face-to-face proceedings, they chose to hold arguments over the phone for the last 10 cases of this year’s session.

Those deliberations addressed some of the major controversies of the year, including Native American rights, religious liberty, the workings of the Electoral College and the many subpoenas of President Donald Trump’s financial records.

In the new format, Chief Justice John Roberts calls on the other eight justices in sequence to ask a question. Rather than being forced to interject and compete with each other, every justice could pose a quietly planned and devastatingly calm question to a focused audience.

There have been a few hiccups in the new system. Justice Sonia Sotomayor forgot to unmute her phone before speaking (“I’m sorry, Chief. Did it again.”).

And someone else forgot to mute their phone before using the bathroom (no apology followed).

The justices now ask prepared questions, rather than attempting to shoehorn something into the discussion. Instead of participating like conversational vultures picking at the sides of the argument, now their questions seem to go to the heart of the issue at hand.

For example, in the faithless electors case about the Electoral College, Justice Brett Kavanaugh posed a simple and clear question: “What is the purpose of having electors?” That is the fundamental question posed by the case, which may or may not have come out in the free-for-all atmosphere of the previous format.

In the same set of arguments, Justice Elena Kagan asked another piercing question: “Suppose that I read the Constitution and I find that it just doesn’t say anything about this subject … What should I then do and why?”

That is a core question of constitutional theory – what does it mean if the Constitution is silent on an issue? – which is rarely posed so clearly in the oral arguments.

Not only are the questions better, but so are the answers: quick, direct and to the point. From the perspective of an ordinary listener, a good question and a brief answer are more informative than a meandering walk.

A third advantage is that all of the justices now participate. Even Clarence Thomas.

Justice Thomas almost never asked questions in the combative format that preceded the pandemic. As he phrased it in 2012, “I think that when somebody’s talking, somebody ought to listen.”

But when given a chance to ask a question without fighting for space, Thomas brings clarity to the issues at hand. In the Trump subpoena cases, Thomas posed one of the most revealing questions: What is the source of the claimed congressional power to issue such a subpoena? The lawyer for the House of Representatives floundered in providing an example of a similar implied power.

The telephone reforms dovetailed with another recent change introduced in October, before the pandemic: The lawyers for each side can speak for two minutes without interruption. The previous practice had been for justices to interrupt at will, and speakers rarely made their opening point before being derailed.

For example, last year when the court considered the controversial question of whether a citizenship question could be included on the 2020 census, the solicitor general of the U.S. – the nation’s chief litigator before the Supreme Court – lasted 23 seconds before the first interruption.

One of the troubling parts of the old system is that the interruptions seem to be gendered, with the female justices being interrupted more often by the lawyers and by the other justices.

In a once rare, but now normal, question from Justice Thomas, he invoked Frodo Baggins from “The Lord of the Rings.”

Frodo is not only a beloved character, but a symbol of the importance of ordinary people.

Perhaps the most influential of the pandemic reforms is that anyone can listen live for the first time to the highest court in the land. The audio is also readily available later on podcasts.

“Even the smallest person,” as “Lord of the Rings” author J.R.R. Tolkien would say, can engage with our constitutional politics.

Thanks to the recent reforms, we no longer need to draw near to give our attention and to understand what our constitutional court is doing.

Not everyone agrees that the new system is better. But as one small voice in the republic, I hope that the inclusive reforms are maintained even after the pandemic fades.