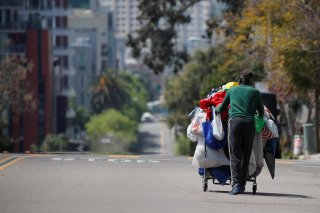 For Californians who have long opposed building more housing in their communities, COVID-19 has provided a new and seemingly convincing argument: density is dangerous. Some have even suggested that the pandemic vindicates proponents of “single‐​family sprawl” or justifies a moratorium on new housing legislation, which are views these observers would likely hold regardless of the current crisis.

At first glance, the argument against density seems correct, but evidence suggests there are other factors at play. A virus that transmits person to person is much more likely to spread in areas where large numbers of people congregate. That’s one reason why urban centers like New York City, Chicago, Detroit, and Los Angeles have been hit hard. And, it is the logic behind social distancing. But, as with so many anti‐​housing arguments, there is less here than meets the eye.

Simply look at those Asian countries that have done a far better job of containing the virus than we have, despite extreme density. For example, Seoul, South Korea is about 50 percent denser than NYC but has had less than one percent as many cases per capita. Likewise, extremely dense Singapore, Hong Kong, and Taipei have held their infection rates to much lower levels than cities in this country. Undoubtedly, previous experience with infectious diseases like SARS improved not only governments’ responses to the current crisis but also individuals’ responses, vastly outweighing any effect density may have had.

Turning to Europe, we also find the link between density and infections to be weaker than expected. Berlin, for instance, is about four times as dense as France’s Ile‐​de‐​France region (which includes Paris) and only slightly less dense than London but has only about half as many COVID-19 cases as either, on a per capita basis. Density clearly wasn’t the central determinant here: other factors had a much bigger impact.

In addition, we should remember that California’s lack of affordable housing creates its own kind of density, one that is even more conducive to the virus’s spread. There is a big difference between people in their own apartments in a dense multi‐​family structure and several roommates jammed together in a tiny space because it is all that is available or affordable.

A study of COVID-19 cases in New York showed that crowding (generally defined as more than one resident per bedroom) contributed to higher rates of COVID-19, while density, in general, did not. The data from California also indicates this: San Diego County, with about 7% of households living in crowded homes, has a lower rate of coronavirus infections than either Los Angeles or San Francisco counties, which have higher rates of crowding. Conversely, Los Angeles County, with a higher rate of crowding (about 11%) has the highest infection rate of the three counties. San Francisco’s crowding rate is only slightly higher than San Diego’s. at 7.1%, and this helps explain its similarly‐​low infection rate.

California’s lack of affordable housing also contributes to the state’s growing homelessness crisis. Yet, the homeless are both extremely vulnerable to infection and a potential source of spread to the population at large. In addition to makeshift efforts to get the homeless off the streets by housing them in hotels or other temporary fixes, California would be well‐​served by ensuring a bigger supply of affordable housing.

Moreover, the economic toll from the pandemic and “shelter in place” orders will fall most heavily on California’s poorest citizens, many of whom are already one missed paycheck away from homelessness. Rent and eviction freezes can create more problems than they solve and can’t last forever. Failing to build more housing will ultimately make the pandemic’s toll worse.

In turns out that the evidence of the impact of California’s excessive housing regulations is far stronger and more convincing than arguments about density and coronavirus. We know that strict zoning and density regulations prevent the construction of affordable housing in America’s urban areas. We also know that many of these laws are part of America’s history of institutional racism and segregation. The COVID-19 crisis does not change these facts.

Perceptions and expectations, whether they are accurate or not, have a way of shaping future behavior and policymaking. Housing affordability will remain a problem for America’s cities long after the current crisis subsides. We can’t afford to let misinterpretations of the pandemic’s causes get in the way of long‐​term efforts to relax the outdated restrictions that prevent affordable housing in so many of California’s cities.