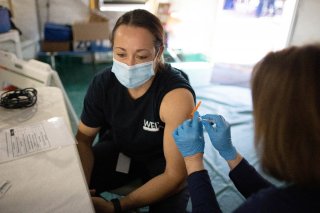 Several coronavirus variants have emerged in recent weeks that have got scientists worried. The variants, which were first identified in the UK (B117), South Africa (B1351) and Brazil (P1 and P2), have several mutations in the spike protein – the little projections on the surface of the virus that help it latch onto human cells. This protein is the target for all the COVID vaccines currently being rolled out. So will the vaccines protect us from these new variants?

Viruses are often not very good at making identical copies of themselves. This means that each time they replicate, changes or “mutations” in their genetic sequence can occur. Most of these mutations are harmless and have no effect on the virus. However, a small minority may allow the virus to avoid being recognised by components of our immune system. Such mutations are known as “escape mutants”.

For months, scientists have predicted that mutations in the spike protein of SARS-CoV-2 could emerge that stop antibodies being effective. Until recently, this was mostly studied for drugs called monoclonal antibodies. These are artificial antibody treatments, such as REGN-COV2, developed by Regeneron. A spike protein monoclonal antibody only recognises a single part of the spike. This means that a single mutation could, in theory, stop the antibody from binding and neutralising the virus.

However, our own antibody response to the spike protein, from either infection or vaccination, is made up of many different antibodies – we make a “polyclonal” response. This means that many different B cells (white blood cells that make antibodies) are activated – and all make different antibodies. So it is highly unlikely that a new virus variant will suddenly appear that cannot be recognised by any of our vaccine-induced antibodies.

But what if there is a partial decrease in antibody efficacy in the face of new virus variants? Several teams of scientists around the globe have been working relentlessly to test whether antibodies from vaccinated people are less able to recognise the new virus variants.

Scientists at the University of Cambridge studied a small group of vaccinated people and identified some reduction in the ability of their antibodies to neutralise the variant identified in the UK (B117). Similarly, a slight reduction in neutralisation of the variant found in South Africa has been reported from the US (B1351). But what do these lab results actually mean for vaccinated people?

At the moment, it is very difficult to examine lab data and predict what will happen in humans. First, we don’t know the minimum number or “titre” of effective antibodies needed to protect someone from the virus. If vaccine-induced antibodies are “excellent” against the original virus but only “good” against the variant, is this good enough? The answer is not yet known for certain, but the mRNA vaccine manufacturer Moderna is confident the answer will be yes.

Second, the lab tests performed on these variants only measure antibodies. Despite this, we know that T cells are important in protective immune responses against SARS-CoV-2. At present, it is unknown what effect the virus variants will have on T cells. Although, as mechanisms of virus recognition by antibodies and T cells are very different, it is reasonable to assume that escape mutants will be responded to differently. So even if a virus variant can avoid certain antibodies, there should still be some effective T cell activity.

On a more reassuring note, scientists widely agree that it is very unlikely a few virus mutations will render the current COVID vaccines useless. However, mutations may make these vaccines less effective overall. One solution is to include additional viral proteins within vaccines, so a more diverse immune response is induced. Another solution is to update the genetic sequence of the spike protein in vaccines at regular intervals, a strategy already being explored by Moderna.

Either way, future vaccines in development will need to be effective against an evolving virus, and ongoing monitoring of vaccinated populations will be essential.