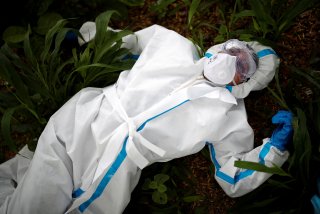 The Great Pandemic isn’t over. Data scientist Youyang Gu’s machine-learning model, one of the more highly regarded coronavirus forecasts, is projecting another 20,000 or so US fatalities in September and another roughly 15,000 in October. That would put the total fatality count at around a quarter million — and maybe closer to 300,000 when you consider the likely “deaths above normal” undercount.

Few national leaders around the world are taking victory laps on their handling of the outbreak, nor should America’s. Preparedness and response should have been better. As CDC Director John Redfield said earlier in August: “We need to owe it to our children and grandchildren that this nation is never under-prepared again for a public health crisis.

As I have previously written, COVID-19 is no cygnus atratus, an unpredictable high-impact “black swan” event. Biosecurity experts and public health agencies around the world have spent the past two decades wargaming numerous outbreak scenarios. In September 2019, just months before the first coronavirus cases emerged in China, the Global Preparedness Monitoring board issued a report warning, “There is a very real threat of a rapidly moving, highly lethal pandemic of a respiratory pathogen killing 50 to 80 million people and wiping out nearly 5% of the world’s economy. A global pandemic on that scale would be catastrophic, creating widespread havoc, instability and insecurity.”

But preparedness can only take you so far, if by preparedness you mean action agendas and stockpiles of medicines and medical equipment. The pandemic has been a reminder that an indispensable core element of any nation’s ability to respond to crises is its technological prowess and wealth. Just the other day, the FDA OKed a simple and accurate coronavirus test that could cost just $5. Before that was the development of the anti-viral drug Remdesivir. And we hope that there will be a vaccine sooner rather than later. As it is, the development process has been greatly accelerated compared to previous efforts. Where would we be if medical and pharmaceutical technology were still at the levels of decades ago? Probably a lot sicker with a lot more fatalities and economic damage.

Same with climate change. What if a changing climate had started affecting the Earth in big ways a century ago? What could we have done, either to mitigate the damage or reduce carbon emissions with new technology such as nuclear power? (Radioactivity had only just been discovered.) And how would they have modeled the rise and impact of carbon emissions in the decade ahead? As physicist David Deutsch writes in the 2011 book The Beginning of Infinity: “Strategies to prevent foreseeable disasters are bound to fail eventually, and cannot even address the unforeseeable. To prepare for those, we need rapid progress in science and technology and as much wealth as possible.”

This seems like an obvious consideration that never seems to haunt the imaginations of those who mock policymakers’ focus on economic growth and innovation or even advocate “de-growth.” And there are a lot more risky scenarios that the ones I just mentioned. If interested, you should check out my recent podcast chat with Toby Ord, author of The Precipice: Existential Risk and the Future of Humanity.