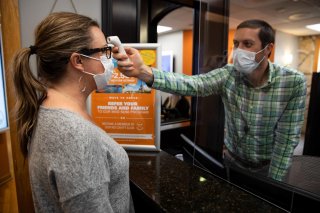 Last week in this space I noted that many businesses are faced with puzzling dilemmas as they try to reopen with social distancing without running afoul of the Americans with Disabilities Act. One issue I didn’t mention: if they require the wearing of face masks as a condition of entering the premises, they may run into some customers who claim to have non‐​obvious disabilities which entitle them, as an accommodation under the ADA, not to have to wear a mask. Even if they strongly suspect such a customer of pulling a fast one, it may seem the less risky legal course just to back off, given that the law confers on business no right to demand medical documentation.

One issue I did mention last week is that the ADA creates legal risks should a business screen those who enter the premises for fever using some method such as a contact‐​free temperature gun. (Amazon announced last month that it was checking more than 100,000 employees a day this way, and checks at store entrances are familiar in some Asian countries.) Two new articles make it clear that this is one of those situations where you can look forward to being sued if you do and sued if you don’t.

Consider first a Slate article arguing against legislation to protect businesses from lawsuits related to COVID-19. The gist of its argument is that we already have a litigation system under which “liability is not likely to present a huge problem” or pose “burdensome difficulties” for businesses that “take reasonable action to keep their customers safe.” Welcome news, and so simple too!

But now that you think of it, how do we identify in hindsight a business whose safety efforts have fallen short of what is reasonable? The Slate article has some ideas on that:

A business that might be considered to have properly reopened can still find itself liable to customers for failure at the level of implementation of whatever safety protocols are required. …. what if a reasonable business would do more, such as taking the temperature of each customer as they enter the business? (Even though that’s not being widely done in the United States right now, it’s an easy precaution to take — and can at least bring down the rate of transmission.)

In sum, then, if someone sues you claiming to have contracted the virus at your business establishment, and their lawyer’s main theory is that you should have been doing front‐​door temperature checks, Slate is going to nod and say the system is working as it should.

Meanwhile, the New York Times reports that the venerable American Civil Liberties Union has issued a new report that is strenuously critical of temperature‐​sensing technologies as a screen against contagion in public places, even when done by businesses on private property. (You may wonder how the ACLU came to see pushing back against private business practices as part of its mission — especially when it lets slide so much rights‐​mangling activity by governments — but that’s another, and sadder, story.)

The ACLU report makes much of various facts that hardly anyone disputes — temperature sensors are far from ideally accurate, some people return “hot” results who do not have COVID-19 while others who do have it are not running a fever, and so forth. The argument for sensors has never been that they are perfect, but that by detecting at least some potentially contagious arrivals, they shift the odds and thus reduce overall spread of the disease in conjunction with de‐​crowding, mask use, and other measures. The report concludes that temperature sensing should go forward only if public health authorities affirmatively call for its use, and it flags possible theories, from data privacy to disparate racial impact, by which lawyers might trip up unwary businesses that go forward with it absent such a mandate.

In its wisdom, the American legal system does not give you a way to avoid legal exposure, with all its costs and miseries — but at least it gives you some choice as to which set of lawyers you will have to face off against.

This article by Walter Olson first appeared in CATO on May 20, 2020.