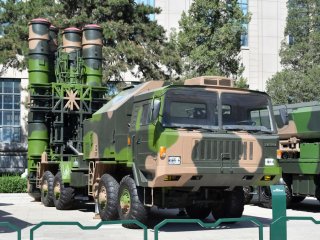 Here's What You Need to Remember: What’s surprising is that Russia continues exporting the near latest missiles such as S-400 to China, when it’s likely that China will pump out an updated version of the HQ-9 for export with the same features within a few years, potentially cutting into Russia’s market share.

At the time of the Sino-Soviet split, China’s only true long-range SAM was the S-75 (SA-2). Work proceeded on various medium and short-range SAMs such as the HQ-61 and HQ-6. However, as China began modernizing its military fully in the 1990s there was a lack of a true mobile long-range SAM such as the Patriot or S-300, both of which entered service in the United States and Russia in the 1980s.

Operationally, the HQ-9 is said to have been deployed to islands on the South China Sea. What’s more worrying though is China’s willingness to export the HQ-9, which is a fairly capable missile. The price is estimated to be cheaper than what export S-300s are going for, and China’s relationship with Pakistan may result in an interesting situation with India fielding S-400s and Pakistan fielding HQ-9s.

Overall, the trend of the HQ-9’s development appears to follow the same general trend of the Chinese variants of the Flankers. China saw an opportunity to procure some of the best Soviet-designed systems in the 1990s, then proceeded to domestically produce them, incrementally procuring more advanced versions from Russia to keep up to date with them. China has also attempted to integrate more advanced technology like active radar seekers or home-on-emission into the HQ-9, however, the status of these advanced developments is uncertain.