Could the Defund the Police Movement Succeed Here? (TIP: Not in the USA) 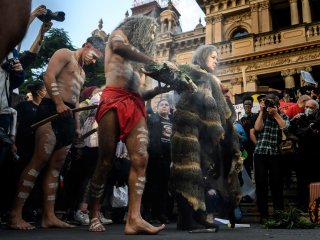 Calls to “defund the police” in the wake of the death of George Floyd are leading to immediate proposals to either dismantle police departments or cut their funding in US cities like Minneapolis, New York and Los Angeles.

There has been similar anger over Indigenous deaths in custody in Australia, but the idea of defunding the police doesn’t translate so easily to this country.

Nor are city and shire councils in Australia required to make funding decisions on whether to employ more police and expand the local city jail. Funding allocations are made by federal, state and territory governments.

However, far from being an empty slogan in the Australian context, the call to defund the police raises fundamental questions of principles and policy.

It forces us to reconsider our priorities: do we want more police and prisons at the cost of social housing, mental health services, domestic violence and family support programs? And could this money be reinvested in other ways to reduce crime?

Why an alternative to policing is needed

Divestment from police and prisons must be in equal measure about investment in the community. Specifically, this means investing in the types of services that are likely to ameliorate the social issues that can compromise personal and/or community safety.

For example, when people suffer a mental health crisis, family members sometimes call 000 for help. In such situations, what is required is a team of emergency response mental health professionals – not the police, who may make the situation far worse.

This is what underpins the concept of justice reinvestment, a strategy to reduce the number of people in prisons through early intervention, prevention, diversionary and other community development programs. Proponents advocate diverting money from the justice system and reinvesting it into these initiatives.

Justice reinvestment is not a new concept in Australia. In fact, it has a special resonance in many Indigenous communities, which struggle with high levels of policing, low levels of infrastructure support and sporadic service delivery, particularly in rural and remote communities.

There are currently community-based justice reinvestment projects in NSW, Queensland, Western Australia, South Australia and the Northern Territory. A government-sponsored program is also operating in the ACT.

The best known of these is the Maranguka Justice Reinvestment Project in Bourke, NSW, where a broad sweep of initiatives has been introduced by the Bourke Tribal Council (comprised of 21 tribal groups living in the area).

Three justice “circuit breakers” were initially introduced to limit the amount of contact members of the community have with police and, hence, reduce the local incarceration rate. This included changing how breaches of bail and outstanding warrants were dealt with and the requirements for a learner driver program.

Other programs have since been developed by the community to address family strength, youth development and adult empowerment.

An independent evaluation conducted in 2018 by KPMG found dramatic reductions in reported incidences of domestic violence (and re-offending), juvenile offending, breaches of bail and the number of days spent in custody.

The positive outcomes also went beyond the criminal justice system. For example, the youth development programs in Bourke have coincided with a 31% increase in year 12 student retention rates.

Other justice reinvestment projects have set their own priorities based on community-defined needs.

The Tiraapendi Wodli Justice Reinvestment Project in Port Adelaide, for instance, focuses on ways to support families with school-aged children to improve well-being in the home. It also offers drug and alcohol programs and post-prison release support to help people reconnect with community and family.

The Olabud Doogethu Project in the Kimberleys focuses on programs for young people in Halls Creek and six remote Aboriginal communities in the shire, including suicide prevention, youth safety, alternative education and mentoring.

What these projects have in common is they allow the community to identify their own social and justice needs and how best to respond to them. In many cases, support from local police and other agencies has been critical in facilitating the development and implementation of these responses.

However, what has been dramatically lacking so far is the “reinvestment” element from government. The justice reinvestment programs in Australia mostly rely on various forms of philanthropic support for their survival. The Maranguka Project receives some state and federal funding, but overall this is rare.

This returns to the question of “defunding the police”. It is not difficult to see how we might respond more effectively to social issues without relying on the police. However, in order to do this, community responses need to be supported and funded.

Over the past 30 years, we have experienced the opposite in Australia – burgeoning criminal justice budgets, more people in prison (particularly Indigenous people) and constant complaints against the police of racial discrimination and violence.

In this context, the call to defund the police is appealing. But in order to help communities, it must be matched by government commitments for the types of programs that have been proven to work.