Could Hitler Have Won World War II (Without Facing the Allies)? 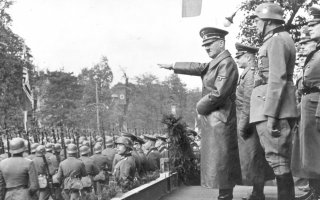 Here's What You Need to Know: One of Hitler’s biggest mistakes was that he never followed through on his legitimate peace proposals with Britain and France.

September 1, 2019 marked the eightieth anniversary of the outbreak of World War II, which cost the lives of an estimated fifty to sixty million people and was the most terrible war in world history. We all know how the war turned out—with an overwhelming Soviet-Western Allied victory over Nazi Germany ending with the destruction of Germany and the death by starvation of millions of its citizens. Given the way the events of the war played out, there was no other foreseeable outcome other than her defeat. But as most historians are aware, German defeat in the war would have been far from inevitable had Nazi leader Adolf Hitler refrained from making certain critical mistakes. This series of articles represents an attempt to summarize the top mistakes and omissions that Germany made during the most terrible of all wars in human history. Of course, the easiest way Germany could have won World War II was by avoiding a fight with Britain, France, and the United States of America. Germany had the military potential to defeat France and could have likely forced Britain to make peace, but with a Navy less than one-sixth the size of Britain’s, it had no means of attacking U.S. territory, let alone defeating the U.S. military. Here are some actions that Germany might have taken to achieve its territorial objectives without fighting the Western Powers.