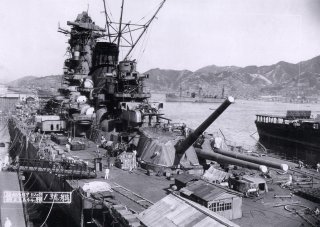 Here's What You Need to Remember: Even if the U.S. Navy’s carrier fleet had not intervened, there is no chance that Yamato would have found her way to Okinawa. She would have been severely but not fatally damaged by fire from the U.S. battle line, possibly crippling or destroying one or two of her tormentors before the end.

Operation Ten Go, the final attempt of the Imperial Japanese Navy to affect the outcome of the Pacific War, is well known for featuring the destruction of the battleship HIJMS Yamato by a swarm of U.S. carrier aircraft. Yamato, accompanied by a light cruiser and eight destroyers, attempted a daylight transit to Okinawa, intending to fight her way to the invasion zone then beach herself. At that point she would turn her main armament on American positions, with the surviving crew joining Japanese Army forces defending the island.

Hundreds of carrier aircraft hit Yamato with dozens of bombs and torpedoes, sinking the massive battleship well before she could reach Okinawa. But the United States Navy had also prepared a welcoming party of battleships to destroy Yamato if she survived the air attacks. What would such a battle have looked like if the air attacks had not succeeded in finding Yamato and her cohort?

For these purposes we will assume that the Japanese task force remains largely unmolested as it approaches Okinawa. This outcome is extremely unlikely, but could have resulted from an intelligence snafu on the part of the Americans (only a few months earlier Takeo Kurita’s Center Force had managed to engage a squadron of lightly defended escort carriers off Leyte Gulf without serious opposition), or more effective use of kamikaze attacks, or because of bureaucratic infighting in the U.S. Navy that allowed the remaining battleship advocates a final reckoning with the Japanese.

The U.S. Navy had an embarrassment of battleships off Okinawa, including three elderly ships, seven “standard type” battleships, six fast battleships, and two battlecruisers. By most accounts the battlecruisers and fast battleships remained with the aircraft carriers, leaving the older, slower battleships to confront Yamato. Admiral Morton Deyo left several of his older battleships behind, choosing to engage with the most modern vessels available. These included most notably USS Tennessee (his flagship) and USS West Virginia, both of which had received extensive reconstructions during the war. USS Maryland, USS Colorado, USS New Mexico, and USS Idaho filled out the squadron. These were accompanied by seven cruisers and twenty-one destroyers.

It is extremely likely, both because of air supremacy and the advantages of radar, that the U.S. squadron would have detected the Japanese squadron first. While Yamato and her escorts held a six knot speed advantage over the American line, the Americans had the advantage of sitting athwart the Japanese line of advance. The best comparison we have for this clash is the Battle of Surigao Strait, in which a squadron of U.S. battleships crossed the T of a Japanese task force approaching the landing beaches on Leyte Island. In this case the Americans would not quite have had all the advantages of preparation, but they could have engaged on their own terms.

At the night action in Surigao Strait, the Americans detected the approaching Japanese task force at 38,000 meters, opening fire as the latter approached within 21,000m. While this lay well within the range of Yamato’s 18.1” guns, it was at the outer range of her own radar capabilities. The Americans would probably get off several salvos before Yamato could respond. Nevertheless, visual identification of gun flashes would likely have allowed Yamato to begin returning fire in short order.

At these ranges there is good reason to believe that Yamato’s armor would have performed well against US 16” and 14” shells. With a 16” belt 8” of deck armor, most shells would have achieved only partial penetration of the armored raft, thus leaving Yamato’s vitals protected. However, shellfire from six different battleships (24 16” guns and 36 14” guns) would undoubtedly have torn apart Yamato’s upper works, as well as wreaking significant damage on her bow. This would likely have seriously reduced Yamato’s speed, as well as her ability to return accurate fire against the American ships. Yamato would have needed to turn to bring her aft guns into play, but would probably not have been able to maintain sufficient speed under fire to turn the corner on the US squadron.

For their part, none of the American ships were well-equipped to deal with 18.1” shells, which would likely have penetrated armored spaces and caused significant damage. Even the main turrets and barbettes of the US ships, their most vulnerable points, would have been at risk of penetration. The more Yamato closed the range, the more lethal her weapons would have become. However, this would have also subjected Yamato to the overwhelming, withering fire from six American battleships. The American superiority in escort vessels would also have told. Each of the seven cruisers at Deyo’s disposal could outrange and outgun the light cruiser HIJMS Yahagi, and would have made short work of the Japanese escorts. This would have opened Yamato up to torpedo attacks from US destroyers, especially as Yamato’s upper works and secondary armament would have been devastated by fire from the U.S. battleships.

In short, even if the U.S. Navy’s carrier fleet had not intervened, there is no chance that Yamato would have found her way to Okinawa. She would have been severely but not fatally damaged by fire from the U.S. battle line, possibly crippling or destroying one or two of her tormentors before the end. Eventually, blind and on fire, her guns would have either fallen silent or stopped firing in any coordinated fashion. U.S. cruisers and destroyers would have sunk, crippled, or chased away Yamato’s escorts in short order. The experience of the German battleship Bismarck, destroyed by a Royal Navy squadron in 1941, is instructive. Thick armor and strong construction made Bismarck very hard to sink, but the overwhelming extent of the British attack eventually crippled her as a fighting unit. Like her German counterpart, Yamato in the end would have been destroyed by a combination of short range gunfire from the remaining U.S. battleships and a plethora of torpedoes from the destroyer flotilla.

Dr. Robert Farley teaches at the Patterson School of Diplomacy and International Commerce at the University of Kentucky. He writes about military history and national security issues, and is the author of Grounded: The Case for Abolishing the United States Air Force, The Battleship Book, and Patents for Power: Intellectual Property and the Diffusion of Military Technology. This article first appeared last year.

Yamato vs. Iowa: What Would Have Happenned if the Two Most Powerful Battleships Fought?