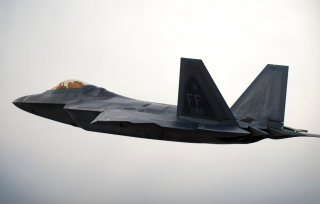 Here's What You Need To Remember:  If by some bizarre circumstance the F-22 is embroiled in a dogfight with the F-14, the chances are the Raptor will kill the Tomcat unless the American pilot suffers from extremely bad luck or makes a serious error. The Raptor holds all of the cards in terms of instantaneous and sustained turn rates—which in the F-22’s case is greater than 30 degrees per second—and energy addition.