Could the P-51 Mustang Have Replaced the A-10 Warthog? 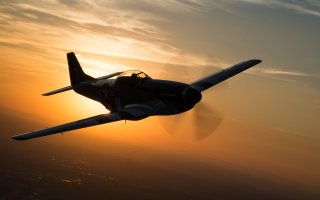 Key Point: The flying branch has tried more than once to retire the ungainly A-10.

The U.S. Air Force has a complicated relationship with its low- and slow-flying A-10 Warthog attack jet. And that’s putting it mildly. The flying branch has tried more than once to retire the ungainly A-10 in favor of speedier planes, only for lawmakers to block the move.

But on at least one occasion, the Air Force actually defended the heavily-armored, gun-armed Warthog from an unlikely challenger—a modern version of the World War II P-51 Mustang that Congress for some reason really loved.

In 1979, Congress demanded the Air Force test out the tiny Piper PA-48 Enforcer light attack plane—a derivative of the then-39-year-old P-51—as cheaper alternative to the A-10, which was brand new at the time. Five years later, the air service put two Enforcers through their paces.

The test revealed that the Enforcer was clearly incapable of competing with the Warthog.

When they ordered the evaluation, American legislators did point out some real problems over at the Pentagon. “Congress expressed concern with the rising costs, increasing technological sophistication and decreasing readiness of tactical aircraft,” according to the official Enforcer test report, which we obtained through the Freedom of Information Act.

The propeller-driven Enforcer promised to solve one of those problems. Piper claimed the plane would cost just a million dollars and be cheap to maintain.

The PA-48 was cheap because it was simple. Like, World War II simple. The Enforcer actually began as the Turbo Mustang, which Cavalier Aircraft Corporation developed in the late 1960s with the P-51 as a starting point. More than a decade later, Cavalier sold the rights to Piper, which renamed the plane as the Enforcer.

The practically all-new aircraft married the Mustang’s basic shape to a powerful turboprop engine. The plane had a variety of other improvements and could carry a range of weapons on 10 underwing pylons.

The various enhancements and the plane’s low cost gave the Enforcer some surface appeal. But in reality, politics propelled the modernized Mustang. By the time the evaluation kicked off in 1984, the Air Force had already been dodging the Enforcer—and its designer David Lindsay—for a decade.

After selling the rights to the PA-48, Lindsay had shut down Cavalier to free up time for promoting the plane. In addition to his aviation interests, Lindsay was a newspaper owner and publisher.

“In the mid-1970s, Lindsay achieved considerable traction … through briefings given to the House and Senate Armed Services and Appropriations Committees,” says Air Force historian Brian Laslie.

“The Enforcer has impressive credentials,” a group of U.S. senators—including powerful South Carolina Republican Strom Thurmond—wrote in a letter to Secretary of Defense James Schlesinger in 1974.

In the 1960s, the Pentagon had bought Cavalier Mustangs for Bolivia. The U.S. Army also purchased a few examples for experiments. Cavalier also sold upgraded P-51s to El Salvador and Indonesia. In the waning years of the Vietnam War, the Air Force had even briefly considered sending Lindsay’s planes to America’s Southeast Asia allies.

On the basis of those sales and near-sales, the senators insisted that the Enforcer “should not be cast aside by service biases.”

“How can we afford not to take the final step and flight test this aircraft?” the lawmakers asked.

But the Air Force had just committed to buying the A-10. And political in-fighting had already forced a fly-off between the Warthog and the A-7 fighter-bomber. The flying branch was is no mood to hold yet another competition.

In spite of this hostility from his prospective customer, Lindsay continued to appeal to the Pentagon and Congress. Piper pitched the Enforcer to the Navy and Marine Corps, too.

“Some members of Congress considered offering the Enforcer to the Army if the Air Force refused,” Douglas Campbell writes in his book The Warthog and the Close Air Support Debate. But the Army was wary of that idea after spending years arguing with the Air Force over what kinds of aircraft the ground combat branch should be allowed to operate.

Fearing another caustic battle, Army officials declined to get involved with the PA-48 campaign.

When their Congressional advocates finally prevailed, Lindsay and Piper seemed caught off guard by the victory. Having crashed one of the two original Enforcer prototypes, the company decided to build two entirely new aircraft for the tests.

Piper spent three years getting the planes ready for their big day. Even so, the newly manufactured Mustangs—just five percent of the parts came from surplus P-51s—had serious problems.

For one, the Enforcers lacked propeller and pilot safety features that both the Pentagon and the Federal Aviation Administration required. But perhaps more importantly, the PA-48s could not safely carry the GPU-5 gun pod.

The pod contained a smaller version of the A-10’s fearsome 30-millimeter Gatling gun. The Air Force had originally built the pods in an abortive attempt to give fast-moving fighter jets the same destructive power as the Warthog.

Without the GPU-5s, the Enforcers had no guns at all.

Piper representatives promised they would fix these problems, but the Air Force insisted on evaluating the existing prototypes. The tests did not inspire any greater confidence in the design.

The flying branch did conclude the PA-48s were easy to operator and repair. But the aircraft were also under-powered and handled poorly with a full load of bombs and rockets.

Pilots also had trouble seeing targets because of the Piper’s long nose. The flyers couldn’t reliably hit anything if they were “unfamiliar with a target area,” the evaluators note in their report.

And while the aircraft were hard for heat-seekers and radars to track, the Enforcers had neither the speed nor the maneuverability to dodge surface-to-air missiles or enemy fighter planes, the official report points out.

Lastly, the single-engine attackers were almost dangerously fragile compared to the A-10. While a Warthog driver sat comfortably inside a tub of titanium armor, the Piper’s pilot had no more protection than his World War II counterparts.

True, the Enforcer was cheap. But so was the A-10—at least, when compared to other aircraft the Air Force was buying at the time.

The Warthog “was nowhere near as expensive … as the B-1 or F-15, whose respective per-unit costs were something over $60 million and $15 million,” Campbell writes.

“The A-10 … is not a sophisticated aircraft by any means,” according to Laslie.

The Air Force concluded that the Piper plane possessed no meaningful advantages over the Warthog. “The Enforcer was antiquated even when compared to the A-10,” Laslie notes.

Lindsay never found a buyer for the PA-48. And having survived that challenge and others, today the A-10 continues to serve on the front lines of America’s wars.

This first appeared in WarIsBoring here, back in 2014.