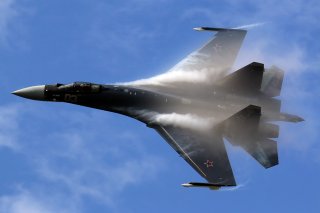 Here's What You Need To Remember: While initial Air Force 6th Gen conceptual work, which is already involved with some early prototyping and technical experimentation, possibly envisions a new platform capable of both advanced manned and unmanned operations. Significantly, the U.S. Air Force has not, as of yet, specified that the new 6th-gen system will, in fact, be a “platform,” hinting that it could be several air vehicles, possibly combining manned-unmanned kinds of teams.

Russia’s RIA Novosti state media has reported that the country is now testing unmanned Su-57 fighter jets at an “undisclosed” location, a move which appears to be part of the country’s broader effort to rival the U.S. and NATO by bringing weapons and autonomous flight to more effective stand-off ranges and increase mission scope for 5th-Gen stealth aircraft.

The RIA Novosti announcement, referred to in a report from Popular Mechanics, cites “anonymous” sources and seems to offer little detail.

Also, Russian state media has a history of at times “hyping up” some of its weapons and military technology. Nonetheless, if true, an unmanned Su-57 does not necessarily place Russia ahead of U.S. fighter jet technology, given the ongoing pace of U.S. autonomous flight development.

For many years now, the U.S. Air Force Research Laboratory and other service weapons developers have been making rapid progress with a “loyal wingman” concept. The idea is to enable a pilot of an aircraft such as an F-22 or F-35 to command and control a small fleet of nearby drones. This changes the tactical equation substantially by allowing manned planes to conduct ISR, test enemy air defenses, and possibly even conduct attacks at safer standoff ranges. One big advantage, among others, is not only a more organic or close-in ability to control drones from the air but also a massive decrease in latency.

For instance, drones are now operated from ground terminals - often from long distances across continents. Enabling air-to-air operation could make navigation, data-sharing, and an entire range of air combat options both faster and more feasible.

In fact, Boeing and The Royal Australian Air Force have announced the existence of a stealthy “loyal wingman” drone preparing to fly by the mid-2020s, according to a report in IEEE Spectrum (Spectrum.ieee.org). The Woomera, as it is called, was announced as the “Airpower Teaming System.”

As for unmanned fighters themselves, that also has been underway for many years with the U.S Air Force. The Air Force demonstrated an unmanned fighter jet many years ago, and as algorithms enabling autonomy continue to advance, the U.S. military has been rapidly developing a wide sphere of autonomous or unmanned aircraft; the prospect is not only not far away, but pretty much already here.

Several years ago, former Navy Secretary Ray Maybus told audiences at the Air Force Association that the F-35 may indeed be the last “manned” fighter ever built.

While initial Air Force 6th Gen conceptual work, which is already involved with some early prototyping and technical experimentation, possibly envisions a new platform capable of both advanced manned and unmanned operations. Significantly, the U.S. Air Force has not, as of yet, specified that the new 6th-gen system will, in fact, be a “platform,” hinting that it could be several air vehicles, possibly combining manned-unmanned kinds of teams.

Interestingly, early industry prototypes of 6th-gen aircraft show models without tails or fins; such an appearance suggests substantial technical maturation success when it comes to enabling maneuverability, vectoring, and even heat signatures from future stealth fighters.

Broadly speaking, however, algorithms enabling unmanned flight have progressed to the point such that unmanned fighter jets would be able to maneuver quickly, acquire targets, and make rapid adjustments in relation to emerging dynamics. However, despite the progress and promise of autonomy, few if any significant weapons developers believe pilots should be replaced anytime soon. Decision-making faculties unique to human cognition, such as an ability to calculate and respond to a host of interwoven variables at one time, are not by any estimation believed to be currently replicated by computer-enabled autonomous systems.

Information sharing and air-to-air networking is a prominent tactical and strategic aim related to unmanned systems, as evidenced by the Air Force’s emerging 6th-generation fighter program. Alongside advancing speed, stealth, maneuverability, and attack technology, the so-described Air Force Penetrating Counter Air/NGAD program is equally focused on information exchange itself as a defining element of future war. Such an approach, looking beyond isolated systems and weapons themselves, envisions expansive “networked” combat with war platforms operating as “nodes” in a larger warfare system of weapons and sensors working together in real-time. Such a technical emphasis, of course, includes the entire sphere of manned-unmanned systems, as the new platform itself is likely to possess both manned and unmanned operational capability.

Kris Osborn is the new Defense Editor for the National Interest. Osborn previously served at the Pentagon as a Highly Qualified Expert with the Office of the Assistant Secretary of the Army - Acquisition, Logistics & Technology. Osborn has also worked as an anchor and on-air military specialist at national TV networks. He has appeared as a guest military expert on Fox News, MSNBC, The Military Channel, and The History Channel. He also has a Masters Degree in Comparative Literature from Columbia University. This first appeared earlier this year.