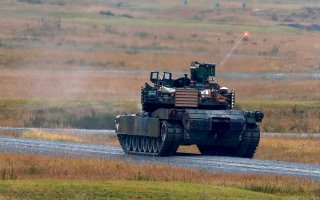 Key Point: “Short of some hitherto unforeseen advancement that renders them obsolete, tanks will be one of those invaluable assets for a long time to come.”

Since their debut in September 1915, tanks have become one of the defining images of modern warfare. Very few military tools provide ground forces with the necessary combination of firepower, survivability, mobility and breakthrough power required in today’s battlefields. Although previously conceived as a tactical tool to be used alongside the infantry to break enemy lines, from World War II onwards the tank became primarily strategic, to be concentrated and used to penetrate, outflank and encircle the enemy. Tank warfare is commonly characterized by aggressiveness, offensiveness, speed and panache. The campaigns fought in France, Russia and North Africa during World War II, as well the more recent Arab-Israeli Wars and Operation Desert Storm during the Gulf War, have been seared into popular memory as the epitome of armored warfare.

As posited by military historian Martin van Creveld, the character of modern war has shifted from the conventional to what he refers to as “low-intensity conflicts.” More commonly dubbed insurgency or guerrilla warfare, this supposedly “new” style of warfare has created dilemmas for the modern tanker in regards to counterinsurgency operations, also known as COIN.

In the context of a population-centric war strategy—which puts a premium on avoiding collateral damage, patrolling on foot and interacting with the natives—where does a seventy-ton tank fit into the equation? In an environment where strategists stress winning hearts and minds, how does the presence of heavy armor portray a less confrontational image? Also, keep in mind that insurgencies often thrive in populated urban areas, which have historically not been a good environment for tankers (recall the fate of German panzers at Stalingrad).

Even if we are to accept this complicated argument that modern war will be dominated by low intensity conflicts, it would be wrong to declare the obsolescence of tanks. Like most military tools, tanks have proved to be versatile and effective at operating in COIN environments—depending on how they are employed. Instead of campaigns of rapid maneuvers and sweeping offensives, modern-tank warfare is predicated on operating as close-weapons-support systems for the infantry in combined-arms teams, exploiting their superior firepower and protection to gain asymmetry against often capable insurgent groups. As Michael Peck on War Is Boring would put it, “Tanks may be the star player, but war is a team game.”

To proclaim the irrelevancy of armored warfare does not only make faulty assumptions about one’s own forces (in this case their adaptability), but that of the enemy as well. The character of individual wars can fluctuate, and insurgencies over time can behave in a more conventional manner. This is something purposely advocated by many theorists of guerrilla warfare, as noted in an essay written by Maj. Irvin Oliver and published by Military Review. He references the works of Chairman Mao, who broke down insurgency warfare into three main categories: strategic defense, strategic stalemate and strategic counteroffensive.

It is the strategic counteroffensive which interests us, whereupon a guerrilla movement has achieved enough parity with government forces to transition from guerrilla to conventional high-tempo warfare. It is at this stage that the tanks have proven to be the decisive factor in forcing the enemy back to the more manageable strategic defense. A conventional challenge requires a conventional response. This is especially true when analyzing the American COIN experience in Iraq following the collapse of the regime in May 2003. It is also true when analyzing the Iraqi experience of fighting the Islamic State starting in 2014. As the fighting transitioned from a lightning-conventional campaign to long and dreary nation-building, the onus shifted towards protecting and interacting with the native population.

The presence of tanks were a constant in the long fighting in Iraq, and again and again they proved indispensable against Iraq’s often capable insurgency. This was certainly the case once “insurgents” sought to follow Mao’s dictum by seizing and holding territory. This has been evident during almost every major battle fought by the Americans during Operation Iraqi Freedom, as well as recent Iraqi experience fighting the Islamic State in Mosul in late 2016.

During the Second Battle of Fallujah in November 2005, some three thousand Sunni militants had managed to seize and occupy the city, transforming it into a fortress by stockpiling weapons and building interconnected tunnels. The U.S. Marines tasked with recapturing the city knew they faced a bloody task without dedicated armor. For what it’s worth, the Abrams proved their worth operating in mutual support with the infantry.

The tanks’ main guns proved useful in destroying enemy weapons positions and vehicle borne IEDs (VBIEDs), while their armor shielded the infantry from frontal fire. Also, the armor provided rapid-breaching capabilities by driving into buildings, allowing the infantry to bypass IED’s placed in doorways. In return, the infantry protected their armor from enemy RPG teams, preventing the enemy from maneuvering to attack the weaker armor at the flanks and rear. Infantry also provided the tank crew with a 360-degrees situation awareness, which would have been difficult for them to achieve alone bunkered down inside all that armor.

Tanks also proved their worth during the Siege of Sadr City. Seeking to prevent rocket and mortar fire launched by forces of the Shia militia Jaish Al-Mahdi (JAM) in the northern Baghdad neighborhood of Sadr City from reaching the Green Zone, Iraqi and U.S. forces were ordered to enter and secure the JAM firing points within the southern suburbs of the area. After they accomplished this, they then proceeded to construct a seven-foot wall spanning 4.6 kilometers along Route Gold (Al Quds Street) to isolate the insurgents from the larger populace and to allow reconstruction work to commence. M1 Abrams tanks and M2 Bradley tanks provided security for the engineers constructing the wall, as the site soon became “a magnet for every bad guy in Sadr City.”

The main cannons and machine guns of the tanks were used to engage insurgents attempting to disrupt the construction work and discover pre-detonated IEDs. The Abrams tanks proved survivable against IEDs and RPG rounds. Purpose-built antipersonnel rounds provided the tanks with precision fire to avoid collateral damage, useful when fighting in the heavily populated area (a total of eight hundred tank rounds were fired during the battle). The tanks worked closely alongside infantry and special operations sniper teams, which is when their superior optics proved helpful. JAM lost an estimated seven hundred fighters by the end of Operation Gold Wall, and its leader, Muqtada al-Sadr, was forced to call for a ceasefire on May 11. The successful completion of the wall allowed U.S. and Iraqi forces to achieve population and spatial control. It also allowed reconstruction work to commence and enabling local businesses. Thus, the legitimacy of the Iraqi prime minister Nouri al-Maliki’s government was bolstered.

Heavy armor has not only served Western armies well in counterinsurgency, but also the armies of developing countries utilizing more obsolete armor. This was evident during the recent Mosul offensive, which was described as the world’s largest military operation in nearly fifteen years. Facing an urban fortress armed with tunnels, street-spanning canvas (to obscure aerial surveillance), artillery, dummy tanks and car bombs, it was abundantly clear that the Iraqi Army faced a high-tempo conventional battle at hand and a contemporary Battle of Hue in Mesopotamia.

“I can say without a doubt that tanks . . . were indispensable to the Iraqi Security Forces securing victory during the Mosul offensive in the manner they did,” says Bradley Brincka, a former U.S. Army officer who spent five months working as an ambulance driver with the Iraqi Ninth Armoured Division in Mosul.

Based on his observations, Brincka separates the mission’s sets for the Iraqi tankers into three broad categories: defensive, infantry support and independent operations. The former involved being utilized in static fighting operations, either to secure captured territory or to provide over watch on high ground. This was generally done during pauses between offensive operations.

After the Islamic State was ousted from the Atshana mountain range west of Mosul, a brigade of the Ninth Division placed their tanks on the commanding heights. From this position, the tanks could observe all vehicular traffic traveling from the main highway running out of west Mosul. Their position also gave them the dual effect of securing the left flank of another armored brigade seizing villages closer to Mosul.

In Brincka’s telling, Iraqi tanks were most often employed in infantry support missions during offensive operations. Starting in February, the Ninth Division was tasked with securing the villages further west of Mosul to completely seal the city off from the banks of the Tigris River in the northwest, in order to disrupt the Islamic State’s lines of communications. The Ninth Division would assault these villages in conjunction with infantry of the Abbas Division, a unit of the paramilitary Popular Mobilization Unit. From early May the tanks spearheaded offensives into the heart of Mosul itself, securing the final Islamic State strongholds near Mosul’s al-Nuri mosque and the Old City. This allowed the liberation of Mosul to be declared just eight weeks later.