Could the United States Station Troops on Taiwan? 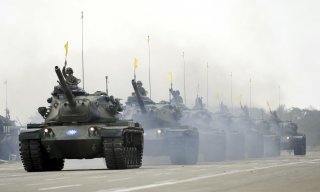 Here's What You Need To Remember: Access to Taiping would give the United States greater mobility in the South China Sea, as well as provide ammunition for rivals such as Vietnam or the Philippines to undermine Beijing's territorial claims.

Enhanced security cooperation between Taiwan and the United States could easily expand as the pair work to balance against China's increased military presence in the Taiwan Strait and the South China Sea. On Nov. 5, Taiwanese Defense Minister Yen Teh-fa told legislators that his government would consider allowing the U.S. Navy access to Taiping Island if Washington requested it. The remark is by no means conclusive, though Yen emphasized that the United States could be granted access for humanitarian or regional security operations if they aligned with Taiwan's interests.

Allowing the United States access to the island would further challenge the status quo at a time when the U.S. Navy is stepping up its presence in the Taiwan Strait. Over the past few months, U.S. warships have twice passed through the Taiwan Strait in a possible attempt to standardize patrols there or even pave the way for an aircraft carrier group to transit through. And in October, a U.S. Navy research ship docked in Taiwan's southern port city of Kaohsiung for refueling. Moreover, Taiwanese media has speculated that U.S. vessels will dock in Taiwan as part of naval exercises that are expected to occur in the region this month. However, U.S. Chief of Naval Operations Adm. John Richardson declined to confirm or deny such a possibility.

Taiping, one of two islands Taiwan controls in the South China Sea, is the largest naturally occurring Spratly Island; 1.4 kilometers long and 400 meters wide (.87 miles and .25 miles, respectively). The island sits 1,600 kilometers away from Taiwan in the South China Sea Basin, and bears strategic importance as an ideal location from which to secure sea lanes and establish a presence in the disputed region. Thanks to its strategic location and resources — Taiping possesses ample fisheries and is the only one of the Spratly Islands with an indigenous supply of fresh water — the island has served as an important logistics base.

A U.S. military presence on Taiping Island or on Taiwan itself would be a serious provocation for China, which regards Taiwan as a wayward province and views U.S. relations with Taipei as a threat to Chinese sovereignty. Beijing has lodged stern protests against previous dockings and passages, and even threatened military action against Taiwan if a U.S. warship arrived in Kaohsiung. And China is also highly sensitive to the possibility that Taiwan will alter Taiping's status quo. Beijing and Taipei have largely overlapping maritime claims, and China is hoping Taiwan's control over Taiping will buttress its territorial claims in the South China Sea after Beijing attains its desired goal of reunifying Taiwan with mainland China. But while Beijing's hopes are high, its fears are equally strong that Taipei would be unable to defend Taiping against invasion or would allow Chinese rivals such as the United States or Vietnam greater access to Taiping Island.

But while Beijing sees Taiwan through the lens of its plans in the South China Sea, Taipei views Chinese expansion as its greatest challenge. Taiwan has been working for years to expand its facilities, fortify its infrastructure and increase military exercises to counter China's expanding influence. Chinese military pressure against Taiwan has grown over the past two years, potentially spurring Taiwan's government to view cooperation with the United States as a convenient way to secure its control over Taiping and further prioritize its goal of countering China's military might in the Taiwan Strait. Unlike its predecessors, Taiwan's current government is less concerned with war legacies, and many Taiwanese citizens see little economic value in Taiping, prompting some scholars to even suggest leasing Taiping to the U.S military — an explosive move that would be certain to infuriate Beijing and escalate tensions.

Access to Taiping would give the United States greater mobility in the South China Sea, as well as provide ammunition for rivals such as Vietnam or the Philippines to undermine Beijing's territorial claims. An agreement on U.S. access to the island is by no means finalized, but the perceived challenge would likely prompt China to increase its own military presence in the region and ramp up pressure against Taiwan. If that happens, the animosity between Chinese and U.S. forces in the region will intensify, and close encounters between their respective vessels — and even interceptions — can be expected to increase.

U.S., Taiwan: Washington Ponders a Military Presence on a Taiwanese Island is republished with the permission of Stratfor Worldview, a geopolitical intelligence and advisory firm. This article first appeared in March 2019.