Could the U.S. Army Soon Field a Stealth Tank? 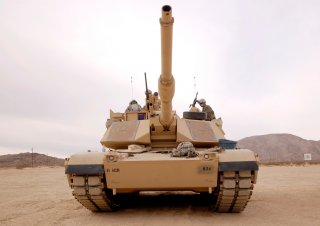 Here's What You Need to Remember: A two-man crew means a smaller tank, but it could also mean an overworked crew—are two people enough to fix a broken track or stay up all night on radio watch? Dodging enemy missiles like a comic book superhero may sound great, but if it doesn’t work, that tank better have some thick armor as a backup.

The Pentagon’s future tank could resemble a stealth fighter jet more than an armored behemoth like the current M-1 Abrams.

The military wants a vehicle that can survive lethal anti-tank missiles, but without having to haul around so much armor plate that it can barely move. It should also have stealth capabilities to avoid detection.

What might this future tank look like? A conceptual drawing of the Ground X-Vehicle looks like something out of Star Wars—four wheels, no turret, a rotating gun and a chassis so small that it couldn’t accommodate more than one or two crewmen.

The Defense Advanced Research Projects Agency—the Pentagon’s future technology lab—has stated some ambitious goals for the Ground X-Vehicle. It should be half the size and weight of today’s tanks, but with twice the speed.

It should also have half the crew, be able to traverse 95 percent of the terrain it encounters and have reduced sensor signatures.

The Pentagon has some radical suggestions for achieving this seemingly impossible dream. To increase mobility, prospective tank designers should consider “rapid omnidirectional movement changes in three dimensions.” This sounds like a vehicle that can raise or lower its chassis like the famously oddball Swedish S-Tank.

For added protection without heavy armor plate, the GXV might automatically dodge incoming threats, which suggests a computer-controlled system that takes evasive action. DARPA also mentions “active repositioning of armor,” which could mean the tank automatically reorienting itself so its thickest armor is facing enemy fire … or some kind of flexible armor plate that rearranges itself to deflect enemy projectiles.

Most interesting is DARPA’s desire for “signature management” to reduce the enemy’s ability to detect the tank through visible light, infrared radiation, sound, or electromagnetic sensors such as radar.

If this sounds familiar, it’s because the description also matches stealth aircraft such as the F-35.

Indeed, DARPA says the GXV project draws inspiration from the military’s long line of experimental X-planes. The X-planes pioneered a host of innovations, such as the X-1's breaking of the sound barrier. Most X-planes never went into production. One exception is the X-35, which evolved into the F-35.

DARPA is attempting to solve a dilemma that has confounded tank designers since the first clumsy armored vehicles trundled into history a century ago.

Designing a tank means juggling three factors—firepower, armor protection and mobility. The problem is that emphasizing one factor comes only at the expense of the other two.

The historical trend has always been toward more armor and bigger tanks. Thus the French FT-17 of 1918 was seven tons, while the M-1 weighs 60 tons. Sometimes the extra protection works. Nazi Germany’s Tiger tank could deflect Allied anti-tank shells like ping-pong balls.

But as DARPA points out, in the eternal race between tanks and anti-tank weapons, today’s tank-killers are winning. In the 2006 Lebanon war, Russian Kornet missiles destroyed thickly-armored Israeli Merkavas.

Merely adding extra armor won’t work anymore. What makes a tank such a powerful weapon is that it’s a mobile armored gun platform. DARPA believes that tank design has reached a dead-end where more armor transforms tanks into ponderous dinosaurs.

In fact, the M-1 tanks the Army dispatched from Germany to Bosnia during the 1996 peacekeeping mission had difficulty moving over many European bridges without engineer support. Heavier tanks are also harder for the Pentagon to ship to overseas theaters like the Middle East.

DARPA says the situation has become so bad that clever innovations are needed “to ensure the operational viability of the next generation of armored fighting vehicles.”

In other words, unless tanks benefit from some bright ideas, they will either be too weakly armored to survive on the battlefield or too heavy to even get there.

Will technology save the tank? It’s too early to say. What we can say is that every weapon, like every machine, is a compromise. The F-35 sacrifices payload and performance to avoid detection—or so the Pentagon hopes.

A two-man crew means a smaller tank, but it could also mean an overworked crew—are two people enough to fix a broken track or stay up all night on radio watch? Dodging enemy missiles like a comic book superhero may sound great, but if it doesn’t work, that tank better have some thick armor as a backup.

The F-35 comparison also raises a more fundamental question for the future of tanks. Some critics warn that the hundreds of billions of dollars the Pentagon is spending on the F-35 better would be spent on developing drones.

Even if that belief paints a rosy picture of drone capabilities, one wonders whether the Pentagon’s vision of a smaller, faster tank should be an unmanned one.

Either way, the tank as we know it must change … or die.