Could the U.S. Army Soon Have Vehicle-Chasing Smart Bombs? 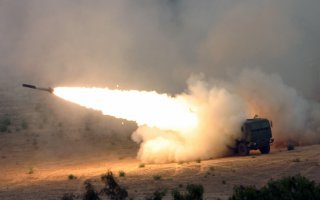 Here's What You Need to Know: Military technology continues to advance.

Someday an enemy tank or a terrorist pickup truck will zoom down the road, with a smart bomb hot on its tail like a bloodhound.

It’s an almost comical thought. But the U.S. Army wants a guidance system that will allow laser-guided bombs to hit moving targets.

The goal is to develop hardware “capable of beam steering a laser designator on moving targets during typical handheld operations when coupled to a sighting optic,” according to the Army’s research solicitation.

The problem is a mismatch between laser-guided bombs and the laser designators that mark the targets for the bombs to home in on. Most targeting situations are static: the targets are stationary and the designator is resting on a platform. But smart bombs are capable of maneuvering in flight after being launched, which means they should be able to track moving vehicles.

“In order to capitalize on the munitions capability, technology must be developed to not only stabilize the beam but lock and track moving targets as well,” says the Army.

Phase one of the project will involve devising a feasible design that can address factors such as the motion of a handheld device, meeting tight size, weight and power thresholds, beam steering mechanisms, and pairing the device with a camera with appropriate resolution and frame rates. Phase two will involve delivering a working prototype.

The technology may be useful for more than blowing up moving vehicles. “Commercially, this could be used as part of a laser deterrent system for border patrol or police force when used with different laser wavelengths,” the Army says. What kind of deterrent this would be for law enforcement wasn’t specified.

The project seems to be tackling the issue of smart weapons whose full capabilities exceed what is offered by the sensors that guide them to their targets. For users like special operations forces, who may be tasked with missions like eliminating a terrorist leader, the ability to hit a target in a moving vehicle—rather than waiting for it to stop—would be useful. So would the capability for conventional forces to launch long-range weapons at targets like moving tanks.