The Coup in Myanmar: An Opportunity for Buddhist Nationalists? 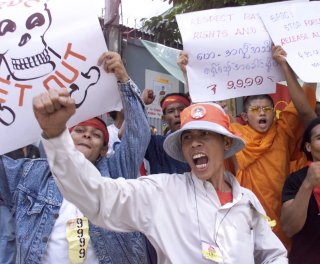 The military’s seizure of power in Myanmar and the detention of head of government Aung San Suu Kyi is far from the first time generals in the country have interfered in national politics.

Myanmar’s military has held a prominent political position in the country for decades. For almost 50 years – between 1962 and 2011 – the country was under successive military regimes.

These regimes displayed an ambivalent attitude to the country’s main religion, Buddhism – Buddhist movements, which were on the whole in opposition to military rule, were severely repressed. At the same time the military drew a significant level of legitimacy from nationalism, which in Myanmar is intrinsically linked to Buddhism.

As scholars of international relations who examine social movements, identity formation and conflict, we have studied the evolution and growth of Buddhist nationalism in Myanmar. While these groups might not be reliable allies for the military, they are a powerful force with a large grassroots base.

Emergence of a Buddhist nationalism

Myanmar is ethnically diverse. Its government officially recognizes 135 ethnic groups. In terms of religion, there is a sizable presence of Christian and Muslim minorities, but close to 90% of the population identifies as Buddhists.

Under colonial rule, the British often moved local populations to different colonies. In Myanmar – called Burma under British rule, but changed by the military after crushing the pro-democracy movement in 1989 – the colonists brought in Hindu and Muslim Indians to serve in the colonial administration.

This resulted in Indian businessmen dominating some sectors of the economy. The British also promoted migrant labor to increase rice cultivation and profits. Between 1871 and 1911, the Muslim population tripled.

Each of these factors generated significant resentment among the majority Buddhist population. In the 1930s, violence erupted between Burmese and people of Indian descent. Muslims, in particular, were cast as a threat to the local way of life.

In 1948, Myanmar gained independence from British rule. But for the next 14 years, the country struggled with armed ethnic conflict and political instability.

During military rule, Buddhist groups were violently repressed. In 2007, some 80,000 Buddhist monks came out in protest against the military government’s decision to stop subsidies of fuel. This became known as the “Saffron Revolution.” The revolution itself was put down by the military regime, but experts believe it might have helped usher in the era of democratization which began in 2011.

It was at this time Aung San Suu Kyi, leader of the National League for Democracy, or NLD, and daughter of Myanmar’s independence leader, General Aung San, was released from nearly 15 years in detention.

The current crisis unfolds in an environment of heightened tensions between Buddhist nationalists and minority groups. Since 2011, Myanmar has been troubled by an upsurge in extreme Buddhist nationalism, anti-Muslim hate speech and deadly communal violence.

This surge was not coincidental. The military-appointed government that led the democratic transition between 2011 and 2016 lifted restrictions on speech and assembly, allowing Buddhist monks to engage politically. The most prominent of the nationalist groups was the Association for the Protection of Race and Religion, commonly referred to by its Burmese language acronym, MaBaTha, led by Buddhist monks.

Because of its highly decentralized nature, estimates of their membership vary greatly, but it is believed to have between 20,000 and 80,000 members in Yangon, the capital of Myanmar, alone.

The MaBaTha Movement became an increasingly destabilizing actor, particularly in their vocal campaign against the Rohingya, and Suu Kyi’s government tried to curtail its growth by outlawing it in 2017. This did little to stop the movement’s growth, as it simply rebranded itself as the Buddha Dhamma Philanthropy Foundation and encouraged its followers to continue their work under that name.

Nationalism and its broad appeal

The nationalist rhetoric found appeal among wide swaths of the Buddhist population, and made Buddhist nationalism an important social force in Myanmar. In 2017, during the violent military crackdown on the Rohingya, there was significant popular support for their actions among Myanmar’s Buddhists.

Meanwhile Aung San Suu Kyi and the National League for Democracy are not blameless when it comes to encouragement of a certain type of Buddhist nationalism. In the run up to the 2015 elections, no Muslim appeared on the ballot for the ruling party or the opposition. The National League for Democracy did not allow Muslims to run as political candidates.

In 2017, the National League for Democracy actively participated in the attempts to discredit reports of atrocities committed against the Rohingya.

Despite this, many nationalists in Myanmar believe that Suu Kyi and the National League for Democracy are “weak” protectors of Buddhism.

While there are no formal ties between the Union Solidarity and Development Party and Buddhist nationalist groups, the party’s rhetoric in the 2020 election campaign certainly courted them. They adopted the nationalist theme of “protecting” religion, portraying the National League for Democracy as a “religion-destroying” party.

Following the election, the Union Solidarity and Development Party accused the National League for Democracy of election fraud, but offered very little evidence to that effect. In this context of heightened tension and misinformation spreading online, the military made their move to seize power.