COVID-19 Reveals the Folly of Performance-Based Funding for Universities 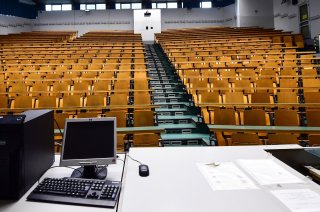 The COVID-19 pandemic has exposed the folly of performance-based funding schemes for post-secondary institutions planned by the Ontario and Alberta governments.

Proposed indicators in both provinces for determining how well universities are performing are linked to labour-market and economic outcomes. For example, Ontario plans to consider the earnings of graduates and proportion of graduates who have full-time employment in a related or partly related field, and Alberta will examine graduate median income.

The economic and labour disruption wrought by COVID-19 shows that university funding cannot be judged against metrics like student employability or salary since universities have no control over those outcomes.

Ontario called for a significant proportion of post-secondary funding to be tied to performance on a narrow set of indicators about a year ago, and Alberta followed suit this past January.

Now, Ontario has rightly pressed pause on its performance-based funding plans, citing the need for flexibility in the current climate. Alberta is hanging on, and a draft agreement is expected to be finalized at the end of May.

Under the performance-based funding models proposed, universities move from being institutions dedicated to fostering critical, creative and engaged citizens that generate public-interest research toward institutions with newly conceived narrow missions.

Should be shelved for good

These funding schemes should not simply be temporarily suspended, but shelved for good.

Judging universities on the basis of how successful they are in attracting research funds (in Alberta under “sponsored research funding”) could lead to a narrowing of scholarship both in teaching and research. Academics may start to focus on what’s rewarded instead of what matters.

Such an emphasis could negatively impact society by devaluing less costly but no less important scholarship, including risky, yet innovative research, community-engaged research and other valuable research that cannot easily be measured or reflected by a simple financial calculus.

Making matters worse is the perverse incentivization of competition between universities rather than collaboration.

Also questionable is the government’s rationale to use current labour-market realities to direct future post-secondary education funding. Alberta’s optimistic investment in petroleum engineers 10 years ago is a case in point: the job market those graduates entered is now significantly different than what was earlier projected.

As highlighted in reports, such as the federal government’s 2017 report from the Expert Panel on Youth Employment, the nature of work is changing. We’re shifting away from manufacturing to service and knowledge economies with a greater emphasis on soft skills such as problem-solving, communication, interpersonal skills and critical thinking.

It’s precisely in the area of flexible thinking and soft skills where universities excel. However, in order to maintain their ability to remain consistent in their quality offerings — whether in professional schools, humanities, social sciences or sciences — universities require predictable funding based on traditional inputs such as how many students are enrolled, their faculty, institutional space and so on.

Defenders of performance-based funding systems will invariably mention the one or two more reasonably conceived indicators, such Indigenous enrolment as proposed in Alberta or work-integrated learning opportunities as proposed in both provinces.

It should also be understood as part of larger Indigenization efforts that are underway in response to Calls to Action from the Truth and Reconciliation Commission.

Tying student enrolments, and their future employment to specific outcomes, with performance-based funding has the potential to skew rewards towards institutions that enrol students with the most social capital — whether Indigenous or non-Indigenous — and the best chances of being employed at the highest pay immediately after graduating.

In terms of work-integrated learning, the popularity of co-op internship programs has been steadily growing without performance-based funding. Student enrolments in co-op programs at Canadian universities have increased 25 per cent to 65,000 in 2013 from 53,000 in 2006.

To leave the impression that universities are currently unaccountable is not only misleading, but untrue. External and internal program reviews, scholarly peer review, student teaching evaluations, professional accreditation bodies and strict financial audits all act as existing accountability measures.

Universities already spend a great deal of resources gathering and responding to data and publishing about performance to better serve, attract and retain students — and ultimately to better serve society. Such work is organized through dedicated research offices.

Imposing performance-based funding systems will invariably lead to the addition of another layer of bureaucracy at both post-secondary institution and ministry levels. There will likely be new or re-classified university management positions whose sole purpose will be to assess, report, target and ultimately game the new metrics.

On the government side, bureaucrats will be needed to gather, evaluate, monitor and, in the longer term, respond to the manipulated metrics as well as to their unintended consequences.

The United Kingdom offers an example of the distortions that occur when coercive metrics are imposed. Various iterations of the “Research Excellence Framework” have led to unintended consequences such as ramping up publish-or-perish pressures to new extremes and de-emphasizing university teaching.

The government responded by creating a Teaching Excellence Framework to add to an ever-expanding set of auditing frameworks.

Although that framework is, for now, still voluntary, it corresponded to how much universities would be permitted to raise tuition — something later amended after criticism. It’s going to be redeveloped in 2020.

It’s still too early to determine what effects the U.K.‘s gold, silver and bronze ratings (yes, just like the Olympics) could have on teaching.

It’s no surprise that these frameworks have led to bureaucratic bloat, while threatening to divert larger and larger pieces of the pie away from teaching, research and service — the very budget line items that serve students and society.

Hopefully we can benefit from the insights the COVID-19 crisis has afforded us, and permanently shelve these misguided performance-based funding plans.

Performance-based funding means pushing universities in the direction of becoming entrepreneurial training centres while performing short-sighted research and development that’s more corporate in style — and less in the public’s interests.

Marc Spooner is a Professor on the Faculty of Education at the University of Regina.