COVID: Should You Ditch Your Mask Once Restrictions Are Lifted? 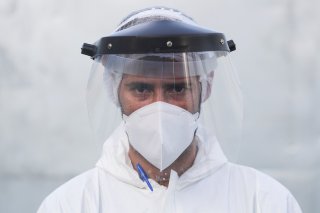 Most COVID-19 legal restrictions in England end on July 19. To celebrate, will you punch a stranger in the face? Probably not. And you certainly shouldn’t. Will you wear a mask on the bus after what the government has called “freedom day”? (If you live in London, where masks remain compulsory on public transport, the answer is clearly “yes”.) Not wearing a mask looks a lot like punching the stranger – you risk harming innocent people. But lots of people who would never dream of punching strangers are seemingly planning to throw away their face masks.

Why would it be wrong to punch strangers? One answer is that it would be against the law. That’s true, but it’s not the key issue. Even if the government forgot to legislate against assault, most of us think it would still be morally wrong. Regardless of the law, we all have a moral obligation not to impose unnecessary harm on non-consenting others. Is there a way not wearing face masks could be justified?

One way is to point to questions of knowledge or blame. Someone who goes around punching strangers displays a callous disregard for other people. By contrast, an asymptomatic coronavirus carrier doesn’t seem like a bad person. Rather, she’s just unlucky.

Unfortunately, this response misses the point. When I cycle my bike, I don’t intend to harm pedestrians. If I hit someone, it would be a tragic accident, not intentional. Still, I should take precautions on the road.

A second possible difference concerns risk. You might think that punching someone will definitely harm them, but not wearing a mask only risks harm.

However, that’s too quick. After all, the person you punch might be congenitally immune to pain. Still, you shouldn’t take the risk.

More tempting is to say the difference is about the size of the risks. It doesn’t make sense to try to eliminate every risk - otherwise, such everyday activities as cycling my bike would be wrong simply because I might hit someone.

It’s true that we can’t reduce every risk. But it’s not obvious that the size of the risk is all that matters. The precaution of wearing a face mask is relatively low-cost. It might be annoying, but nothing compared to dying of COVID. Also, even if the risks you impose are low, if enough people impose a low risk, the result can be a lot of harm. It’s not clear that “low risk” always equals “OK”.

The third possible difference concerns consent. Consent functions a bit like a magical power, making the morally impermissible permissible. It would be wrong for me to punch a stranger on the street, but it’s fine for Tyson Fury to punch an opponent who has consented to a prize fight.

When people walk around the streets, they don’t expect to be punched – any resulting harm is non-consensual. By contrast, you might think, when people get on the bus, they know they might be exposed to all sorts of microbes, so any harm is consensual.

The notion of consent also provides a neat explanation of why some risky activities, such as riding my bike, are permissible. We assume that everyone would agree to a system that allows for everyone to ride bikes, even if it imposes a risk of accidents, because we all stand to gain from that system. The issue isn’t the size of the risk, but what we agree to.

Still, can we assume that everyone else on the bus does consent to being exposed to our viruses? After all, many people have no real choice but to catch the bus if they want to get to work or school. They may feel they have no option.

So, is catching a bus without a mask on closer to riding a bike or punching a stranger? These are the kinds of question we all need to be asking ourselves if we care about acting morally, whatever the law says.

Stephen John is a Senior Lecturer in Philosophy of Public Health, University of Cambridge