Is This the Cure for Cancer? 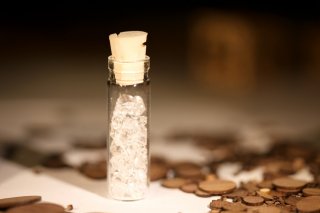 Here's What You Need to Remember: A promising new technique could help ensure this process becomes more widely adopted with minimal risks.

Over the years, scientists have put together an amazing array of microscopic markers that they can place within cells whenever they need to label and observe distinct parts of a cell’s interior. Such labeling is used for a wide array of research, including cancer research.

But sneaking these markers into cells, through the membrane that protects them from unwanted substances, is far from easy. Creating too wide a breach in the cell membrane when injecting the markers can be fatal for the cell. Plus, once they’re smuggled inside, many markers are actually toxic – and are either attacked by the cell or lead to its demise.

In the search for non-toxic markers, scientists have landed upon nanodiamonds: identical to those bejewelling engagement rings, but a million times smaller. Nanodiamonds make excellent reporters within cells, but they've yet to feature in scientists’ toolkits because getting them inside the cell without damaging the membrane has proven too difficult.

Led by my supervisor Christelle Prinz from NanoLund, Lund University, our team has created a new way to sneak nanodiamonds into cells without causing damage or provoking the cell to attack them. Our new technique will help scientists study the properties of living cells at the molecular level, but it could also become a versatile new tool to help us understand more about cellular diseases like cancer and Alzheimer’s.

Our bodies are built out of approximately 40 trillion cells, ranging between 1 and 100 micrometers in size. Some of these cells sometimes get sick – causing cancer in various tissues, or neurological diseases such as Alzheimer’s in brain cells. By monitoring sick cells, researchers can learn more about the origins and development of these diseases.

Microscopes can peek within a cell, but they’re poor at discerning a diseased cell from its healthy counterpart. For more detailed monitoring, researchers label cells with biological markers which expose more about what’s happening inside cells.

Existing biological markers, like organic dyes and fluorescent proteins, can expose some of the conditions within a cell for researchers to study. But these markers often kill the cell, limiting their utility for long-term cellular studies. Nanodiamonds, on the other hand, don’t kill cells – which is why they’re now being used by researchers in cellular science.

Nanodiamonds are either produced by detonating synthetic diamonds, or from the powder left over after milling natural diamonds. Despite their luxury connotations, they’re actually relatively cheap for researchers like us to purchase – costing about the same as existing biomarkers.

Crucially, nanodiamonds are biocompatible: they’re completely harmless and non-toxic when placed inside living tissue. That means they can lurk incognito within our cells. Once inside, nanodiamonds shine within cells – sending information back to researchers in the form of fluorescent light, the wavelength of which changes depending on the pH or the temperature within the cell.

It’s not easy getting nanodiamonds into a cell. Cell membranes have evolved an impressive protective apparatus to keep unwanted intruders outside. To sneak nanodiamonds in, we either have to hope that cells will invite them in voluntarily – a very slow and inefficient process – or else we have to force their entry through the cellular membrane.

Microinjection, using microscopic needles, has been used to deliver markers like nanodiamonds across the cell membrane without fatally damaging the cell, but it’s a painstaking method that’s often unsuccessful.

Even after a successful infiltration, nanodiamonds risk being gobbled up by a cell’s lysosomes, which are a bit like a cell’s bodyguards. Biomarkers captured and confined within lysosomes are of little use for researchers trying to observe the whole cell.

A cell’s lysosomes, coloured orange in this diagram, tend to capture foreign agents they detect in the cell. Designua/Shutterstock

We’ve developed a new method to sneak large numbers of nanodiamonds into cells, largely undetected by the lysosomes, and without damaging the cell itself. Our approach combines a very gentle electric field, which eases the cell membrane open, with so-called “nanostraws” – like drinking straws, but nanoscopically small.

In our study, we used cells derived from a patient with lung cancer. We lay these cells on thousands of nanostraws, comparable to a minuscule bed of nails. Underneath these nanostraws lay our nanodiamonds, in a slightly conductive solution.

When we applied low-voltage electrical pulses to the nanostraws, small openings appeared across the cellular membrane, at the tip of each nanostraw, creating an access pathway for the nanodiamonds to reach the cell’s interior.

Our new technique is roughly 300 times quicker than simply incubating cells in a solution of nanodiamonds and waiting for some of them to naturally pass into the cell. It also halved the entrapment of nanodiamonds inside lysosomes, thus allowing a big portion of the delivered nanodiamonds to stay free and mobile inside the cell’s interior: a successful infiltration.

Because nanodiamonds can report on the temperature or acidity of different parts of a cell over time, we hope our nanodiamond infiltration technique could help identify and track cancer cells, or brain cells that are implicated with Alzheimer’s disease. And, if we can find a way to pair nanodiamonds with certain chemicals, we could also find even more refined ways to spy on conditions within the fundamental building blocks of our bodies.