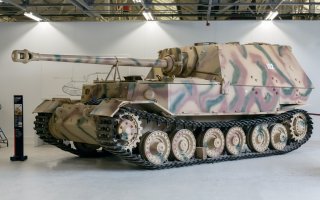 Key Point: The son of a World War II veteran, Flint Whitlock is a former U.S. Army officer who served in West Germany and Vietnam and has been the editor of WWII Quarterly since 2010. He brings to his role over 30 years as a military historian and author, with scores of magazine articles and 13 books to his credit; many of his books have won regional and national awards. Besides lecturing around the country, Flint has appeared on The History Channel, the Fox Channel’s “War Stories with Oliver North,” and in several World War II documentaries. Additionally, he was selected by both the Smithsonian and National Geographic to conduct tours of the World War II battlefields of Europe.

Although he was responsible for the defense of Normandy, Rommel, head of Army Group B, was not the “Supreme Commander” on the German side, as Eisenhower was on the Allied side. Over Rommel was Commander-in-Chief, West (OB West) Field Marshal Gerd von Rundstedt and, of course, Adolf Hitler. And the German navy, air force, and SS were also beyond Rommel’s control. Rommel could not make an independent move.

Seeing to Mistresses Instead of the War

A number of key German commanders were absent from their posts during the critical first hours of June 6, 1944. Believing that the Allies would not invade during a violent Channel storm on June 5, Admiral Theodor Krancke, the naval commander in the west, was on his way to Bordeaux. Maj. Gen. Edgar Feuchtinger, commander of the 21st Panzer Division, was heading to Paris to see his mistress; the commander of the Merville Battery on the far eastern flank of the invasion area was in bed with his.

Field Marshal Erwin Rommel had left Normandy for a trip back to Germany for his wife’s 50th birthday; General Friedrich Dollmann, commanding the Seventh Army in Normandy, had left his headquarters to attend a war-games exercise at Rennes––over 100 miles south of the Normandy coast. Lt.. Gen. Heinz Hellmich, commander of the 243rd Division, was heading there, too, as was Maj. Gen. Wilhelm Falley, CG of the 91st Air-Landing Division.

False Assumptions About the Enemy

The Germans had long assumed that the Allied landings would come at the Pas de Calais because:

(a) that coastal city was only 20 miles from southeast England,

(b) Calais was far closer to Germany’s western border and,

The Allies’ concocted a near-perfect deception plan by building a fictitious force (“First U.S. Army Group” or FUSAG around Lt. Gen. George Patton) with fake radio traffic and hundreds of realistic but dummy tanks, trucks, landing craft, and aircraft in southeast England where the “build-up” would be spotted by German reconnaissance aircraft. The presence of Patton and the dummy force near Dover further convinced the Germans that the invasion would take place at Calais.

Even after the invasion began, the Germans still believed that Normandy was merely a diversion and that the real invasion would take place at Calais––and Patton would lead it.

The Allies were able to “turn” all the German spies in Britain into double agents who then fed false information to their bosses back in Germany.

“Secure” Communications That Were Anything But

By being able to break the German military codes, the Allies were able to know that their efforts to plant false information was being swallowed hook, line, and sinker by the enemy’s high command.

The Führer issued a directive that Germany’s armored forces, which were kept well back from the beaches, could only be deployed upon his personal order.

Compounding the situation, Hitler had gone to bed late on June 5 and gave orders that he was not to be awakened for any reason. His staff obeyed that order; by the time Hitler woke up, it was too late to stop the invasion.

The Germans had lost their weather-forecasting ability when their weather ships in the North Atlantic were captured or sunk and Weather Station Kurt, installed by a U-boat crew in Northern Labrador, Newfoundland, ran out of battery power. The Germans were thus unable to see the brief “window” of opportunity that occurred during the middle of the Channel storm––and which the Allies had spotted.

Many Foreign Conscripts (Perhaps Too Many)

Many of the German coastal units were made up of conscripts from Nazi-conquered lands who did not wish to die for Hitler––and surrendered the first chance they had.

The Heavy Failure of the Kriegsmarine

Except for a few isolated, daring attacks (such as during an amphibious-landing rehearsal at Slapton Sands on April 28, 1944), the German navy was absent in the English Channel, allowing the massive seaborne force to cross the Channel virtually unimpeded.

Myriad Shortcomings from the Luftwaffe

Germany’s air force no longer had control of the skies, thus missing the chance to spot the Allied build-up on England’s southern coast––and being able to disrupt or destroy it. The Luftwaffe’s last remaining fighter squadrons in France had been moved far out of range from the Normandy beaches.

And, once the invasion was underway, the movement of the panzers and other reinforcements was stopped by Allied air power. Without control of the air, Germany was doomed.