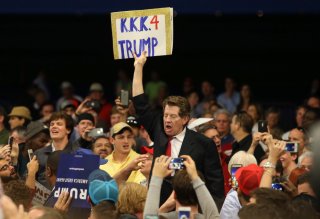 Despite failed lawsuits, recounts and formal confirmation that President-elect Joe Biden won the 2020 presidential election, President Donald Trump and his supporters continue to maintain that the election was rigged and that he and the American people are victims of massive voter fraud.

This politicization of victimhood is nothing new to the Trump presidency.

It was there from the beginning. When Trump descended the escalator in Trump Tower to announce his presidential campaign in 2015, he stoked fears of Mexican rapists and drug traffickers attacking U.S. citizens.

The claims of victimhood ran throughout his presidency. He played on U.S. fears of being attacked by foreign terrorists to enact the travel ban targeting several Muslim-majority countries.

When protesters called for the removal of Confederate monuments, Trump claimed that they wanted to make people ashamed of American history. As COVID-19 spread across the U.S., Trump dubbed it the “China virus” and contended that China would pay for what it had done.

Journalists and commentators also turned to a sense of aggrievement to explain the popular support Trump received. A narrative emerged: White, working-class voters from rural and Rust Belt communities felt abandoned by the political establishment. Decades of free trade, automation and cuts to the social safety net turned these voters against the mainstreams of both political parties.

But this narrative fails to answer two critical questions: Why did upper-middle-class and wealthy white voters – who aren’t economic victims – vociferously support Trump in 2016? And why do communities of color – who’ve experienced centuries of economic and racial victimization – largely oppose him?

I teach about whiteness in the U.S. and am writing a book on the rhetoric of white entrenchment. I believe Trump and Trumpism tapped into a long-standing sense of aggrievement that often – but not exclusively – manifests as white victimhood.

The politics of white victimhood is nothing new. For example, before the Civil War, pro-slavery advocates blamed abolitionists for causing slave revolts and endangering the lives of white Southerners.

A sense – or fear – of victimhood pervades contemporary white supremacy, from the extreme to the mainstream.

Since the 1980s, figures like Lou Dobbs and Pat Buchanan have alluded to plots involving Mexican immigrants and the Mexican government to retake the U.S. Southwest.

This paranoid victimhood ultimately led to a ban on ethnic studies in some Arizona schools after politicians claimed that the classes encouraged hatred toward white people and activists contended that Mexican American studies would bring about a reconquest of the U.S. Southwest.

And there is the perennial War on Christmas wherein some Christians feel they are persecuted by people who say “Happy Holidays” to recognize that their fellow citizens may celebrate other faith traditions. Notably, the idea of a “War on Christmas” was coined by Peter Brimelow, founder of the VDARE white supremacist website.

Even avowed white supremacists fear their victimhood and use fear of becoming the victim as a recruiting tool.

Similarly, at the 2017 Unite the Right rally in Charlottesville, Virginia, white supremacists chanted, “Jews will not replace us.”

Trump’s stoking of victimhood is neither novel nor something that merely taps into economic anxiety.

To understand this identity invested in victimhood, we must explore whiteness.

These “wages of whiteness” gave white Americans the social advantages afforded by higher-paying jobs as well as residential and school segregation. The psychological payout came in knowing that even if they were being economically exploited by elites, at least they held social standing above their Black working-class counterparts.

Although the U.S. is far from achieving racial equality, many of the formal mechanisms for these wages have disappeared. We live in hypersegregated neighborhoods, but racist housing covenants are now illegal. Public education is tremendously inequitable and often de facto segregated, but Black or Mexican schools are no longer explicitly written into the law.

But because whiteness is an identity built upon securing advantages over others, the historical shift toward greater equality – even if it’s often more formal than substantive – is perceived by many whites as a loss. American sociologist Michael Kimmel has described this as a form of “aggrieved entitlement.”

For example, programs designed to address centuries of inequality and admit more students of color to universities are viewed by some white people as victimizing whites.

Purely economic explanations of Trumpism ignore this aggrieved entitlement. When commentators contend that free trade and technological advances have left behind blue-collar Americans – whom they often assume to be white – they fail to note how the perceived loss of the “wages of whiteness” has fostered a political identity based on aggrievement.

The danger isn’t simply a victimhood identity – it’s how victimhood can be deployed and weaponized. White power groups use this sense of victimhood to recruit and radicalize.

On numerous college campuses, white supremacist groups have posted flyers asserting “It’s OK to be white” and “Diversity is code for white genocide.” These slogans tap into a preexisting sense of white victimhood in much the same way that Trump has done at his rallies — stating the purportedly politically incorrect to elicit a sense of besieged belonging.

In its most dangerous manifestations, the rhetoric of victimhood is used to excuse violence or rationalize murder. That’s evident in the cases of mass killers Elliot Rodger, Dylann Roof, Patrick Crusius or even Timothy McVeigh and the Oklahoma City bombing. Church shooter Dylann Roof invoked this victmhood when he claimed that “What I did is so minuscule to what they’re doing to white people every day all the time.”

Trump may recede from the limelight in coming months. But this politicized victimhood that existed long before him – a victimhood he powerfully tapped into and mobilized – will be fertile soil for white supremacy and political violence for generations to come.