Davos 2021: Why We Can't Count on the Same Old Globalists to Lead 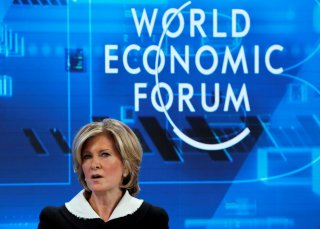 The 51st World Economic Forum starts on January 25, but with a major difference. Whereas this is famously the annual gathering at the Davos ski resort in Switzerland of global leaders from business, government and civil society, this year’s event will take place virtually because of the pandemic.

Inevitably, the event for the 1,200-plus delegates from 60 countries aims to respond to the apocalyptic events of the past 12 months. “A crucial year to rebuild trust” is the theme, built around the “great reset” that World Economic Forum (WEF) founder Klaus Schwab and Prince Charles launched last year.

The event will be accompanied by virtual events in 430 cities across the world, to emphasise the fact that we face global challenges that require global solutions and action.

This recognises that the effects of the pandemic are likely to be increasingly compounded by other major global threats, including the climate crisis, financial crises, and social and economic inequality. To give just one example, the COVID-19 mortality rate in England in December was over twice as high in the most deprived areas than the least deprived.

So how successful is the WEF’s mission likely to be?

This is not the first time that global crises have required global action, but there have been mixed results in the past. After the first world war, the UK played a pivotal role in forming the League of Nations on the international stage. But this ultimately failed to deliver, with the UK’s insistence on post-war reparations undermining Germany’s economic recovery and political stability.

When the world next sought to prevent future conflicts towards the end of the second world war, the lessons were to some extent learned from last time around. The allies met at Bretton Woods, New Hampshire, in the US in 1944 to develop policies for economic stability.

This led to a new system of interlinked exchange rates organised around a gold-backed US dollar, as well as new institutions to help manage it, including the International Monetary Fund and what later became the World Bank. This was followed in the next couple of years by the United Nations and the forerunner to the World Trade Organization. The Bretton Woods system endured until the early 1970s when the US came off the gold standard, but much of the system created in the 1940s survives in one form or another today.

The 2007-09 financial crisis, which involved the first global recession since the 1930s, led to many calls for action to prevent similar crises in future. There was some tightening of regulation, but the threat of instability remains due to excessive debts and too much speculation.

With only the 1940s seeing a really adequate response to global crises, what will make the difference this time?

The WEF’s vision of a “great reset” recognises that what is needed to tackle these crises goes far beyond economic reforms, or climate measures, or tackling a pandemic – it is all of these combined, and more. It is the idea that global action needs to be underpinned by a mission to change society, to make it more inclusive and cohesive; to match environmental sustainability with social sustainability. It follows their call to “build back better” – one echoed by many around the world.

The WEF seeks action across seven key themes: environmental sustainability; fairer economies; “tech for good”; the future of work and the need for reskilling; better business; healthy futures with fair access for all; and “beyond geopolitics” - national governments collaborating globally.

The WEF says the key is reestablishing public trust, which is “being eroded, in part due to the perceived mishandling of the coronavirus pandemic”. But this may prove difficult, given there is little change in corporate or government leadership. The big hope is 78-year-old Joe Biden, who was US vice president for eight years during which many of these problems were mounting, not being solved.

Sadly, the main cause for optimism is the fact that today’s crises are so great that they may provoke action. Future financial crises look likely. The climate crisis is increasingly accepted to be an existential threat. And now the pandemic is a huge economic and human disaster, with further such pandemics recognised as likely because of everything from the explosion in global travel to the effects of climate change.

A key question for this year’s conference, which is due to be followed by a second phase in Singapore in May, is whether a new form of globalisation will be developed.

There was a free-market form of globalisation leading up to the first world war, then a retreat during the inter-war period. Bretton Woods led to an era of regulated globalisation from 1945 until the 1980s. But since then, the “global elite” has pushed back regulatory restrictions on everything from speculative financial flows across borders to mergers and acquisitions.

A new era is required, building on the Paris Agreement to limit climate change now that the Americans are joining again - with more support of a Green New Deal geared towards achieving net zero emissions and making the global economy truly sustainable.

We need bold initiatives to tackle the threat of future pandemics; financial speculation, tax evasion and avoidance, and the threat of financial crises; and to reduce the unsustainable inequalities of wealth, income and power across the globe.

Will corporate and political decision-makers rise to the challenge? There needs to be sufficient popular pressure - from citizens, voters, consumers, workers, educators and activists - to push governments and business to change course fundamentally. These past few years have witnessed the Occupy movement, the Me Too Movement, Black Lives Matter and countless climate crisis groups.

Calls for action have been coming from business leaders at Davos and elsewhere for years. The hope is that this time, the scale of the emergency will finally make radical change unavoidable.