Dead or Alive: What is the Fate of U.S. Navy's Big Railgun Project? 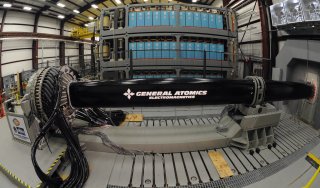 Here's What You Need To Remember: The U.S. Navy's electromagnetic railgun would be able to zero in on targets from 100 nautical miles away and fire a solid metal slug that could travel at speeds of Mach 6, or 4,500 mph.

Sounding akin to something out of science fiction, the U.S. Navy's electromagnetic railgun would be able to zero in on targets from 100 nautical miles away and fire a solid metal slug that could travel at speeds of Mach 6, or 4,500 mph. After years in development, much of it troubled, not to mention some $500 million in R&D efforts, the railgun will remain – at least for now – in fiction.

"The railgun itself has overcome all the required technical hurdles, but the systems simply aren't in place to take advantage of its capability and speed — the fire control systems, the communications link with a command center," a source with direct knowledge of the program told Task & Purpose this week. "If there's no funding, the program can't move forward."

The U.S. Navy electromagnetic railgun (EMRG) project was first conceived in 2003, and the Office of Naval Research began development in 2005. The project was not without some advancements, and development seemed on track. In 2012 a technology demonstrator fired projectiles at Naval Surface Warfare Center Dahlgren Division in Virginia, while in 2015 the Navy announced it would test the weapon from the USNS Trenton, reported Popular Mechanics.

In 2017 the projected seemed on track, and the Navy even released video that highlighted the Dahlgren gun, which was developed by BAE Systems and General Atomics, firing multi-shot salvos at speeds reaching up to Mach 6.

Since then shipboard testing has been pushed back.

The question becomes whether it could be one that is stuck in the development stage.

The EMRG was originally planned to be one of the main weapons for the U.S. Navy's naval surface fire support (NSFS) despite the slower rate of fire than other long-range weapon systems. The new guided-missile destroyer USS Zumwalt (DDG 1000), which is being readied for offensive surface strike testing and training, was slated to conduct the NSFS missions, but according to Jane's the Navy has cut the Zumwalt­-class fleet due to the high cost for the advance warships.

While the EMRG remains in development limbo, the Department of Defense (DoD) has turned its attention to the hypervelocity project (HVP), a super-dense shell that was originated envisioned as the ammunition for the Navy's supergun. It is the same projectile that was developed for the EMRG but has been modified to fire from traditional gunpowder-based naval guns. It thus can fit the Navy's 127mm deck gun, and while it only has a top speed of Mach 3 it is a significant improvement over standard 127mm projectiles. It could be used against land targets, aircraft and missiles and even enemy warships.

This article originally appeared earlier this year and is being republished due to reader interest.