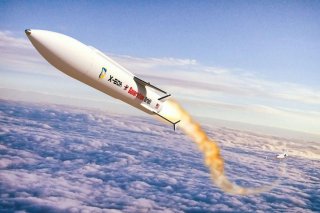 While the U.S. is rightly focused on combatting the COVID-19 pandemic, it is important for the leaders within Congress and the Pentagon to also prioritize preparing for another threat for which the nation currently has no defense: hypersonic weapons.  Today, several adversaries possess hypersonic capabilities that present complex challenges, especially in a regional fight, which would demand the nation protect its forces, allies, and regional interests.  Winning this fight requires U.S. forces and capabilities that can impose costs deemed unacceptable by the enemy through the potential use of offensive weapons and a defense that denies the enemy the benefit of their weapons.  The ability to defend against the use of offensive hypersonic weapons does not exist.  The time is now to develop U.S. defensive capabilities against hypersonic weapons before an adversary decides to exploit this vulnerability.
THREAT

The U.S. leads the world in almost every aspect of military capability and capacity, except for hypersonic weapons.  Both Russia and China are well ahead of the U.S. in the development and fielding of hypersonic weapons technology, and as stated by General John Hyten, then Commander of U.S. Strategic Command, in March 2018, “we don’t have any defense that could deny the employment of such a weapon against us.”  This is still the case today.

The reason the U.S. is unable to defend against hypersonic weapons in a regional fight is the current defense design for countering air and missile threats was developed and deployed to defend against traditional ballistic missiles.  The flight path, speed, altitude, and unpredictability of the hypersonic missile threat poses challenges that make these weapons virtually undetectable within the current defense design.  While this article focuses on regional threats, hypersonic weapons also present significant challenges to the defense of the homeland that should be addressed in parallel with the regional threat.

The first challenge posed by hypersonic weapons is that their launch may not be seen by the current space-based infrared sensors designed to alert forces to an impending strike.  An air-launched scramjet or hypersonic missile launched by a non-ballistic launch platform might not develop significant infrared plume during launch, and would not be detectable by current overhead early-warning systems.

A second challenge for defending against hypersonic missiles is due to their flight altitude and the curvature of the Earth.  Traditional ballistic missiles fly well above 100 km (definition of space), making them more easily detectable at long range.  Hypersonic missiles fly in the atmosphere at altitudes between 30-50 km above the ground (see picture below).  Current U.S. ground- and sea-based missile detection systems find and track ballistic missiles at 3,000 to 4,000 km in a wide search fence, with time to pass intercept information to defensive systems.  Hypersonic missile detection range is shorter because the majority of their flight is masked by the curvature of the Earth.  Detecting and tracking missiles hypersonic missiles for adequate warning would require an unsustainable number of terrestrial sensors.  To ensure an effective defense design against hypersonic weapons requires a space sensing layer.

Source: CRS image based on an image in "Gliding missiles that fly faster than Mach 5 are coming,” The Economist, April 6, 2019.

A third challenge is the unpredictability of the hypersonic missile.  The current defense design against ballistic missiles uses space-based infrared sensors that track the missile until its burnout and then predict an impact point which informs ground- or sea-based sensors to be able to reacquire and track on reentry.  During the midcourse phase of flight, there are very limited means to track the missile.  This system works because ballistic missiles do not maneuver in this phase, and their flight path is predictable.  This is not the case for hypersonic weapons, which are capable of maneuvering, both in speed and vector, during the midcourse phase.  This makes these weapons unpredictable as to where they are targeted and where they could be acquired by terminal sensors.  Tracking a weapon with an unpredictable path would require an unreasonable number of terrestrial sensors since they would need to be continuously searching everywhere for incoming missiles.  Hypersonic weapons flightpath unpredictability again requires a space layer that can continuously track the missile through the entire flight path.

Finally, the speed alone of the hypersonic missile poses a challenge to the current defense design.  Even if the defense design could resolve the problems of predictability and altitude by increasing the number of sensors, seeing a missile in flight with a radar is like looking through a soda straw at a golden B.B.  It takes incredible accuracy just to find it, and the higher the speed, the less detection and decision time there is (the engagement window), especially when the detection range is so short due to the weapon’s altitude.   And, even if the sensor is able to maintain a track on one of these challenging weapons, the sensor could easily be overwhelmed by an attack with multiple weapons.

So, U.S. forces currently find themselves in a hypersonic defense predicament where they may not detect the launch, can’t track the weapon through midcourse, can’t predict the impact point, and won’t have a defensive interceptor ready or capable of defeating the incoming weapon.  The ability to maneuver forces in and around a battlefield, and logistically support those forces, would be significantly degraded with a lack of defenses against these weapons.  Even with a regional fight, U.S. forces throughout the world would be vulnerable to attack.

There is a pathway to overcome these challenges.  Just like any other missile defense system, there must be an effective chain of weapon engagement capabilities to “Find, Fix, Track, Target, Engage, and Assess” (F2T2EA) hypersonic vehicles throughout their flight profiles.  Foundational to the kill chain is the ability to Find, Fix, Track and Target (F2T2).  Developing a weapons-quality target track is necessary for any interceptor to engage and destroy the target.  First things first, the defense design must get the F2T2 system right, or even the best interceptor in the world will be unable to engage the target.

For the hypersonic threats, policymakers and national security experts agree that priority No. 1 for establishing a credible defense is the development and deployment of a space sensing layer.  The task was assigned to the Missile Defense Agency (MDA), and they are pursuing this capability through the Hypersonic and Ballistic Tracking Space Sensor (HBTSS) program.  Using the high ground of space, this space sensor layer will provide continuous tracking of hypersonic and ballistic missiles, from launch through intercept, anywhere in the world.  These sensors would most likely be placed in Low Earth Orbit (LEO), be lightweight, low power, and modular. These LEO sensors would be low cost and could be easily replaced at end of life.  Vice Chairman of the Joint Chiefs of Staff General Hyten also suggested that we might consider using Medium Earth Orbit (MEO) in order to increase survivability and provide alternate fields of view.

Unfortunately, to date, the HBTSS remains underfunded ($150 million invested in 2020) compared to the $2 billion invested in offensive hypersonic capabilities.  Even in Fiscal Year 2021, the entire budget for Space Technology Development is only $136 million out of a $3.2 billion budget for all hypersonic-related research, and HBTSS is but one program in all of the Space Development Agency’s (SDA) budget that includes sensor, spacecraft, launch vehicles, and space communications.  The current pace of investment will not close the widening gap in hypersonic defense capabilities.  While the U.S. Department of Defense (DoD) is clearly focused on developing offensive hypersonic capability, it should not lose perspective that the ability to detect, track, and determine the origin and target of hypersonic weapons is critical to the timely and effective use of U.S. offensive hypersonic retaliatory capability.  HBTSS provides this critical warning and tracking capability.

As the U.S. works to build the network of sensors to be able to Find, Fix, Track, and Target an adversary’s hypersonic missile system, there are a few imperatives the U.S. should pursue:

Hypersonic weapons will continue to threaten U.S. forces and allies while defending America and its interests worldwide.  Today, the lack of hypersonic weapons defense makes deployed forces vulnerable to attack.  Unfortunately, those forces are vulnerable in the future and U.S. investment is still low.

The good news is that the U.S. can catch up, and the DoD way ahead is straightforward. First, the DoD must work in parallel on multiple offensive and defensive initiatives to integrate all elements of the HBTSS with the other layers of IAMD.  Second, the DoD must move forward with HBTSS – with the necessary program requirements outlined above – and get launching. The Department needs to run relatively inexpensive LEO sensor experiments and push the resultant data throughout the industrial base.  With air, land, and sea-based offensive weapons on track for operational fielding in the next three to five years, there should be plenty of opportunities to run concurrent offensive and defensive sensor tests.  As General John Hyten has stated, “Put some sensors on some satellites, fly them cheap, fly them fast, see what they can do, and then figure out what you need to actually go build.”  And finally, the DoD must ensure the required funding is available to the right organizations to fill this critical vulnerability.  While the slight plus-up for hypersonic defense in Fiscal Year 2021 is a good sign, substantially more investment will be required to support additional launches and tests.  Priority No. 1 for establishing a credible defense against hypersonic weapons is developing and deploying a space sensing layer, and it should be funded as such.

The U.S. is definitely at risk right now, and the threat is growing.  Hypersonic weapons and the nation’s lack of defense exposes a risk to its national interests and forces in a regional fight that their adversaries may choose to exploit.  The current defense design also destabilizes the overall strategic deterrence by highlighting a national vulnerability, while providing a technological advantage to U.S. adversaries.  HBTSS is part of the larger effort to reduce this risk and build a hypersonic and ballistic missile defense design to address this vulnerability.  The time is now to accelerate HBTSS implementation and set a path to protect the nation, allies, and strategic interests.

Douglas M. Fraser, General, U.S. Air Force, retired, is the former Commander of U.S. Southern Command, Deputy Commander of U.S. Pacific Command, Commander of Alaskan Command, Director of Operations for Air Force Space Command, and Commander of the Space Warfare Center.  With over 37 years’ experience in joint military operations, international security, and interagency cooperation, Doug is a recognized expert on air and space operations and overcoming global security challenges.  Doug is currently serving as a Senior Fellow for National Defense University and as a Stellar Advisor for Stellar Solutions, Inc.

Frank Gorenc, General, U.S. Air Force, retired, is the former Commander of U.S. Air Forces in Europe, Africa, and NATO Allied Air Command.  His operational assignments also included Commander of 3rd Air Force and Commander of the Air Force District of Washington.   Frank has over 35 years of senior executive experience in all aspects of aerospace operations, international affairs, and integrating emerging technologies into the tactics, techniques, and procedures for real world operations.  He is currently an independent consultant and a Stellar Advisor for Steller Solutions, Inc.

This article by Douglas M. Fraser, Frank Gorenc, and John S. Shapland first appeared in Real Clear Defense on May 13, 2020.