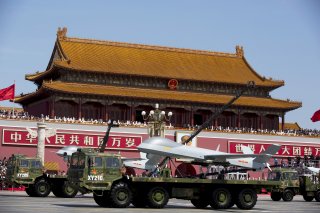 Here's What You Need to Remember: Military reforms are therefore a significant “turning point” for any given emerging country to “overtake a slower vehicle on a curve,” it said, suggesting that the United States is in its decline.

The document paints a dark worldview, with China confronting “antagonistic blocs of the Western world” that are encouraging separatists in Tibet, Xinjiang, and Hong Kong, as well as terrorists and Falun Gong practitioners.

The document calls for the People's Liberation Army, or PLA, to shift its focus from the defense of China's coast to land, sea, and air operations beyond China's borders.

These are interesting assertions. A challenger with a strong military would seem more likely to push the dominant power into unleashing a preventive war before the challenger gets any stronger -- unless the emerging power is so militarily strong that it can deter a conflict.

Michael Peck is a contributing writer for the National Interest. This article first appeared in 2018 and is being republished due to reader interest.