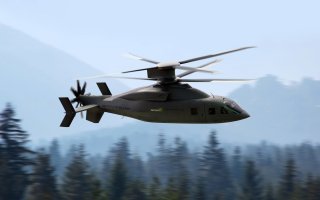 Here's What You Need to Know: The Army is looking for a new helicopter.

Most Army and industry weapons experts, engineers and innovators may not use the word “stealth” when describing the service’s emerging Future Long Range Assault Aircraft (helicopter) program, yet developers are clear to discuss the merits of thermal signature management and finding ways to lower the aircraft’s radar signature.

The Director of Army Futures Command Future Vertical Lift Cross-Functional team described this in an interesting and impactful way when referring to the kinds of innovative engineering methods employed in the construction of new, less-detectable helicopters now developing for the 2030s.

“We know how to hide in the radar clutter and we understand how that generates standoff and overmatch,” Rugen told The National Interest last year.

An essay by Lockheed-Sikorsky-Boeing on its new DEFIANT X cites airframe enhancements to “improve aerodynamics and reduce the thermal signature.”

“We optimized the design based upon the Army’s requirements. We have done quite a bit to the design and made enhancements to reduce the thermal signature and make changes to the exhaust system,” Jay Macklin, Sikorsky business development director, Future Vertical Lift, told The National Interest in an interview.

Certainly, a cursory look at the airframe of a DEFIANT X appears to reveal a smooth and gradually curved or rounded radar evading external configuration.

The absence of hard edges, protruding structures or sharply angular structures minimize the fidelity of any kind of radar return signal. This is because electromagnetic “pings” need to generate return signals from such hard, angular surfaces to offer renderings of an aircraft’s size, shape, speed and angle of approach.

Multiple pings from different sharp or detectable shapes give radar commanders a much clearer picture of the “dimensions” to a given aircraft. The DEFIANT X also has very thin wing-like structures and, interestingly, central rotor blade structures melded directly into the aircraft.

Essentially, there is no easily detectable “pole” or protruding vertical structure leading from the body up to the rotor blades, something which could generate a more specific or recognizable radar return “shape” rendering.

Thermal management is also of great value, as the more the temperature of an aircraft and the surrounding air blend in with or align with that of the surrounding atmosphere, the more difficult it will be for thermal imaging, heat-seeking sensors to locate it. This means the lower and less detectable the heat emissions or exhaust coming from the helicopter are, the stealthier it can be.

Low radar observability can also be thought of in terms of tactical maneuver as well, given that utility helicopters such as a Black Hawk often fly lower to the ground along a specific, less detectable trajectory. The higher a helicopter is above the ground, the more exposed it might be to longer-range radar “pings” traveling through the air as being at greater altitude increases the aperture or field of view available to radar systems.