The Delta Force Is Fearless, But Some Members Really Hate Skydiving 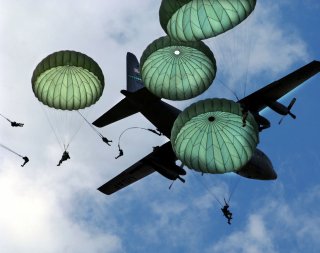 Charles R. and I both belong to an exclusive club in the Delta Force — the Jump Hater’s Club. There was a small number of members in that club. Some members held their membership secret from the rest of the men of the Force. Some were in the club and didn’t even really know that they were members at all. Charles R. and I wore our membership on our sleeves, and we always made damned-certain that our membership dues were paid up to date!

I was in the club for so long, had such seniority that the Board of Directors (BOD) wanted me to accept a seat on the Board, or accept a nomination to fill the CEO position — neither of which I accepted. I just always felt truly that those positions should be held by non-victims of hatred for parachute jumping.

I never new the principal reason for Charles R’s hate/fear of jumping; we just never talked about jumping as often as we could. I simply was born with a congenital and inherent fear of heights that is clinically registered. I never mulled the fact that if I joined the Delta Force that I would be high up off of the ground often. I just wanted in the Force so bad I thumbed my nose at my humanity.

Related: From King to Clown: Even Delta Force operators have bad days

Charles R. Was the badass Team Leader for our Charlie five-man assault team; I was a shooter on our Bravo assault team. In the marshaling area prior to jumps Charles R. And I were reticent and silent, brooding over our jump aircraft where it sat deriding us both on the red clay airstrip of St. Mère Église parachute drop zone.

We donned our parachutes in silence, we two, humming softly that classic Simon and Garfunkel tune in our heads. We kissed our rosaries and did that awkward paratrooper’s walk to our jump aircraft — a twin-engine Sherpa. I looked around the group and locked eyes with Charles R.; he looked at me dolefully and shook his drooping head. I shook me head back at him to give him at least the idea that he wasn’t alone.

I conducted a mental inventory to make sure my Hate Club dues were not about to expire; yeah, that tank was full. At 12,500 feet above the ground we stood up and shuffled to that back of the aircraft where the ramp was lowered to afford us a grand exit. I shouldered up to Charles R. who tilted his head toward me and cautioned:

“DON’T GET ANYWHERE NEAR ME, MAN!” To which I promised:

“NO WORRIES, MATE… YOU JUST STAY THE HELL AWAY FROM ME, BRO!”

On the ground again I dumped my spent parachute on the packing mat to the sight of Charles R. standing just there over his parachute bundle with his arms folded like Mr. Clean. He shook his head in displeasure, a thing to which I answered with my own disenchanted shake of my head:

Charles R., like so many of the Delta men, came from the vaunted 75th Ranger Regiment. He was a bit old-school and Ranger-rigid about certain things. He embraced fundamental regular Ranger disciplines, a practice that got him some good natured ribbing in Delta. For example, during a jump or travel manifest call, traditionally the reader calls out your last name, to which the owner answered by calling back his first name and middle initial. A manifest call at Delta sounded like this:

And that was him — Charles R. Deckerson, Army Ranger and Delta pipe-hitter at large!

During one flyaway exercise our higher headquarters, JSOC, sent an officer to take charge of the manifest call and load out… because… Delta men were incapable of doing it themselves? I know — right?? As it were, the first name the officer called out was Deckerson, to which Charles R. sounded off smartly with the usual: “CHARLES R.!”

That set in motion a concatenation in which the rest of the entire formation, when their last names were called out, responded equally with: “Charles R.!” The JSOC officer was furious — FURIOUS, I tells ya! But a funny thing happened that very night… all the Delta brothers slept just fine, the JSOC officer’s tantrum not withstanding.

Charles R. Was a boxer; I thought I was a boxer until Charles R. Ventured up to our boxing ring and junked up for a spar. I left my face print in Charles R.s boxing glove that day as he slipped around the ring like a ghost on his feet and his lead left hand hanging down low in the distinct style of Tommy “Hitman” Hearns.

When it came time for Charles R. to move on in the Unit, the men of his assault team, Kow, Souse, Skoche, a Jon Tucker the fat muthr-phukr approached me with a request to put together a nice cartoon that they could mount in a glass-covered wooden frame. I was immediately onboard with the Idea and nothing other than a jump setting would do for the cartoon in my mind!

I got to work and hammered it out in good time, adding color to it to heighten the quality. I was pleased with the work and the men were ecstatic! Why, Charles R. Was beside himself over the gift; he genuinely was quite please with it and I only wonder if he still has it to this day. Pictured behind and right of the falling Charles R. is his second-in-charge Jon Tucker tracking fast and warning Charles R. that he is looking at his watch by mistake, rather than his altimeter. The speed is ridding Jon of his clothing — boots, socks, and somehow undergarment — as well as essential jump gear like altimeter, helmet, goggles, oxygen mask, ripcord, and Automatic Opening Device (AOD).

He was a badass Ranger, a hard pipe-hittin’ Assault Team Leader in the revered Delta Force. He was a stalwart member of the HALO Jump Haters Club, he was… CHARLES R.!

By Almighty God and with honor,