Democratic Candidate Defends Looting: "So What? Burn It To The Ground If That’s What It Takes" 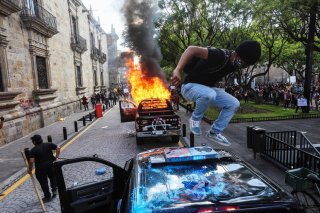 A Democratic congressional candidate downplayed looting and arson during a digital campaign event on Tuesday.

Responding to a questioner who said she was concerned about the left-wing push to abolish the police, Democratic Texas candidate Kim Olson argued that police departments are overfunded, before pivoting to downplaying looting and arson. Calls for abolishing or defunding the police have come in the wake of protests over George Floyd, who died after a Minneapolis police officer knelt on his neck for several minutes, video showed.

“What the hell you got snipers on the roof for in a peaceful march? Even if people loot, so what?” Olson said in a video that was first reported by The Washington Examiner. “Burn it to the ground, you know, if that’s what it’s going to take to fix our nation. I know people don’t want me to say that, but I’m just saying.”

Olson is in a runoff for the Democratic primary for Texas’s 24th Congressional District. Rachel Perry, Olson’s campaign manager, said the candidate’s words were “taken out of context.”

“This quote is being taken out of context,” Perry told the Examiner. “As a combat vet, Colonel Olson knows first hand the human heartbreak of violence. She knows we cannot use force to fix a systemic problem of undue violence and discrimination perpetrated by those who are sworn to protect and serve.”

She added: “We have to rebuild from the ground up a color-blind public safety institution across America.”