The Desert Eagle: A Rifle Disguised as a Pistol? 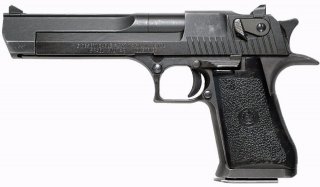 Here's What You Need To Remember: The Desert Eagle was never officially picked up by any major military or police force and is primarily the realm of gun enthusiasts and hunters looking for a show-stopping sidearm. In case of a rifle malfunction the Desert Eagle’s hitting power could spell the difference between a successful hunt or serious injury.